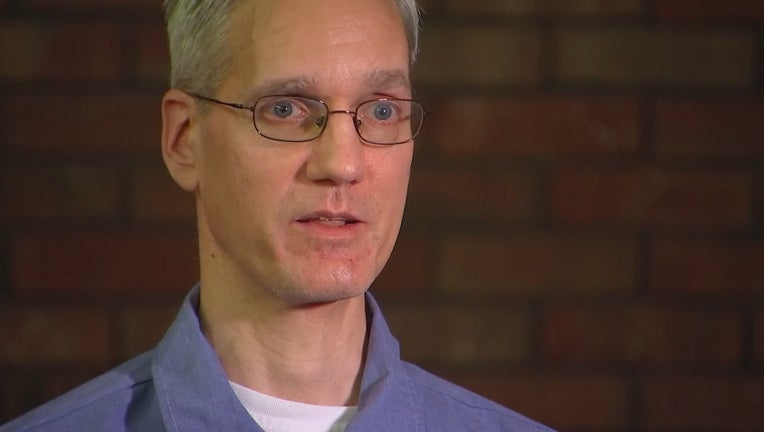 (FOX 9) - Five years after killing his wife Amy, her enigmatic husband Stephen Allwine claims he was the victim of a high-tech framing.

Five years after killing his wife Amy, her enigmatic husband Stephen Allwine claims he was the victim of a high-tech framing.

Allwine was convicted of first-degree murder in the November 13, 2016, killing. Prosecutors and police said Allwine tried to hire a hitman on the ‘Dark Net’ to kill his wife, and when that plan turned out to be a ruse, he killed her himself and staged the crime scene to look like a suicide.

In his first interview, Allwine talked to the FOX 9 Investigators in the chapel of Stillwater Prison, where he is serving his life sentence.

Allwine offered no hard evidence proving his innocence, but rather tried to cast doubt on compelling computer forensic evidence found on 64 electronic devices taken from the Allwine home in Cottage Grove.

Allwine claims the real killer planted evidence on his electronics to implicate him in the murder. He suggests physical evidence at the crime scene that could exonerate him was ignored or discounted.

Those who were involved in the case said there is no doubt Allwine is guilty.

"In this case, the evidence was overwhelming," said Mark Lanterman, a computer forensics expert who analyzed the electronic devices for the prosecution.

"I would say this is probably the most compelling case I have ever worked on in the last 30 years," Lanterman added.

Evidence Lanterman uncovered showed Allwine had romantic affairs with at least two women he had recently met on the adultery site Ashley Madison. Allwine declined to discuss the affairs.

Washington County prosecutors argued convincingly at trial that Stephen, an elder in his church, killed Amy because divorce would have affected his religious standing in their church. 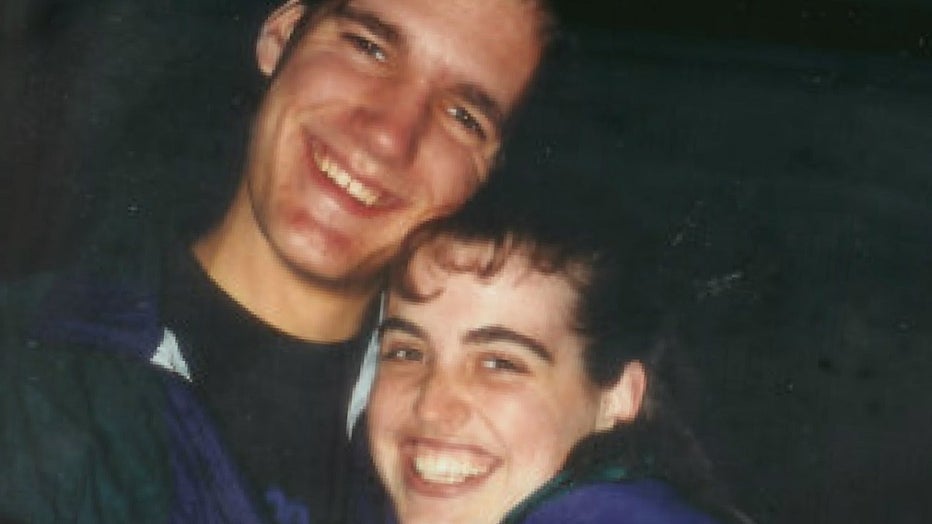 From all outward appearances, Stephen and Amy Allwine led a life devoted to faith and family. They met at a Christian college, quickly fell in love, married, and adopted an infant son.

Stephen became an information technology specialist and a deacon in his church. Amy ran a dog training business adjacent to their Cottage Grove home at the end of a dirt road.

Everything changed in May 2016 when an FBI agent and a Cottage Grove police detective approached Amy and Stephen Allwine and told them someone was trying to kill Amy.

The evidence came from a trove of emails the FBI received from an anonymous source on the ‘Dark Net,’ an underbelly to the regular internet that requires a Tor browser to navigate.  Activities are difficult to trace on the Dark Net because internet signals are bounced across multiple relay servers around the world.

The emails the FBI recovered were from a Dark Net site called Besa Mafia, which claimed it could provide professionally trained Albanian contract killers, for a price.

On Valentine’s Day, the site received an anonymous email from someone who called themselves ‘dogdayGod.’

"I am looking to hire you for a hit, but what is the recommended way to convert cash to bitcoin anonymously," read the initial email from ‘dogdayGod.’

Other emails would negotiate the payment of bitcoin, various scenarios for the killing, and the name of the intended victim, Amy Allwine.

"This bitch has torn my family apart by sleeping with my husband (who then left me), and is stealing clients from my business," the anonymous dogdayGod wrote.

Stephen Allwine said perhaps someone had confused his wife with another Amy. He said the FBI interviewed Amy separately and he believes they never seriously considered him a suspect.

"I believe, based on the evidence that I have seen now, that I know who did it. And I trace it back to someone she was working with," Allwine said.

Police and prosecutors believe that was Stephen Allwine’s plan from the beginning: To frame someone else for the murder and distract law enforcement attention from himself.

But Lanterman, the computer forensic expert, discovered a trail of digital breadcrumbs on Allwine’s electronic devices – phones, laptops, hard drives, thumb drives, and servers – that become a mirror image of the transactions of the anonymous dogdayGod on the Dark Net.

There were more than 70 data points of comparison Lanterman was able to use to create parallel timelines that sync almost perfectly.

"It’s my understanding Mr. Allwine is an IT guy by profession, and we have egos," Lanterman said. "And I think Mr. Allwine thought he was smarter than everyone else.  And fortunately for justice that wasn’t true."

While dogdayGod was contacting Besa Mafia on the evening of February 14, 2016, Valentine’s Day, Stephen Allwine was at his home on his MacBook Pro looking for bitcoin for the first time.

The next day, February 15, Allwine is looking up Amy’s itinerary for a dog training convention in Moline, Illinois, and mapping the distance from Chicago.

Two minutes later, dogdayGod is telling Besa mafia, "the target will be traveling out of town to Moline, about a 3-hour drive from Chicago. What is the price in btc (bitcoin) for hit and ideally making it look like an accident?"

On March 6, DogdayGod sends a picture of Amy from a vacation in Hawaii to besa mafia, seconds after Stephen is downloading that same picture from the couple’s home server.

Besa mafia tells dogdayGod how to buy bitcoin and how to cover the trail by reporting it stolen.  A few days later, Stephen Allwine buys bitcoin and reports to Cottage Grove Police he was the victim of a scam.

That bitcoin had a unique, 35-character alpha-numeric code, known as a bitcoin wallet.

On March 22, Allwine copies the code to the ‘Notes’ application on his iPhone 5.

Forty seconds later, the Note is deleted from Stephen’s phone. The deleted Note is copied to the cloud and is backed up to Allwine’s new iPhone 6 on May 27.

On August 3, Allwine’s iPhone 6 is backed up on his MacBook Pro, including the deleted bitcoin wallet.

For Lanterman, forensic evidence doesn’t get any better.

"So we have a unique 35 character bitcoin wallet being created on a Note, while we have communications from an independent source, the FBI, referencing that exact bitcoin wallet.  And then that note being deleted all within the same one-minute period," Lanterman said.

Asked about the bitcoin wallet, Allwine said, "My supposition, I don't have evidence to back this up, is that somebody else got it posted to the cloud. And then the cloud syncs with my MacBook and brought it there."

How is that possible?  Allwine claims he was hacked.

"One of the things I always tell people is to update your passwords. And unfortunately, I didn’t follow my own advice," Allwine said.

"It’s certainly something we looked at," Lanterman said.  "There was no evidence of any device used by Stephen that these devices had been compromised or even had the ability to be compromised."

Police and prosecutors believe there never was a hitman and the Besa Mafia site was a scam.

Eventually, Allwine realized he was duped, and decided to kill Amy himself, police and prosecutors said.

"There’s blood all over"

"I think my, I think my wife shot herself. There’s blood all over," Stephen tells the 911 dispatcher.

The couple's 9-year-old son is with him, who at one point is heard on the call asking his father, "Are you going to remarry?"

With his wife’s bloody body nearby, Stephen laughed and said, "I don’t know, bud."

The call is remarkable because Stephen seems so calm, almost nonchalant.

"I've got a nine-year-old son that is 30 feet away. My thoughts have to go to him and how to best protect him from this ultimately gruesome situation," Allwine said.

Allwine told police his wife wasn’t feeling well that morning, so around lunchtime he took their son to stay with his father-in-law. Allwine claimed he left the house around 5 p.m. to pick up his son and go to Culvers for dinner. When they returned, he said, he found Amy dead in their bedroom from a single gunshot to the head.

But Cottage Grove police officers who arrived that night recalled the FBI questioning the couple months earlier about the murder-for-hire plot.

And to police, this certainly didn’t look like a suicide. The handgun was by Amy’s left hand, even though she was right-handed. There were no gun powder burns on her hands or her head, indicating the gun wasn’t fired next to her at close range.

It appeared from the blood soaking the carpet that Amy’s body had been moved, and there were indications from Luminol that blood on the floor had been cleaned up.

A toxicology test revealed Amy had Scopolamine, an anti-nausea drug in her blood system. In high doses Scopolamine can render someone helpless.

If it was a hitman, why would they use the Allwine’s firearm that they bought months earlier for their own protection? And how did they know to use the back door, the only entrance to the home without surveillance cameras? And then there’s the husband himself, whose demeanor seemed odd, and unemotional.

"I think in general, I tend to have a flatter, less emotional demeanor than a lot of people," Allwine said.

Allwine had appealed his first-degree murder conviction arguing prosecutorial misconduct and an inadequate defense.  He also wants to submit evidence from a forensic detective who was on the defense list, but never called to testify.

In August, the Minnesota Supreme Court rejected those claims and affirmed his conviction.

Allwine said he recently filed a brief with the U.S. Supreme Court and is still pursuing post-conviction relief through the district court.  He is also considering writ of habeas corpus through the federal court system.

With few options or appeals left, a long prison sentence stretches before Allwine, yet he still maintains his innocence.

"For justice to really be done in this situation, you need to bring the person to justice who was responsible," Allwine said, getting emotional only in the final few minutes of the interview, before leaving for his cell block.

Lanterman, who feels like he knows Allwine better after meticulously dissecting his digital life, doesn’t buy it.

"I think he’s arrogant," Lanterman said.  "He did it.  And he’s having a hard time accepting that responsibility.  He’s a coward."