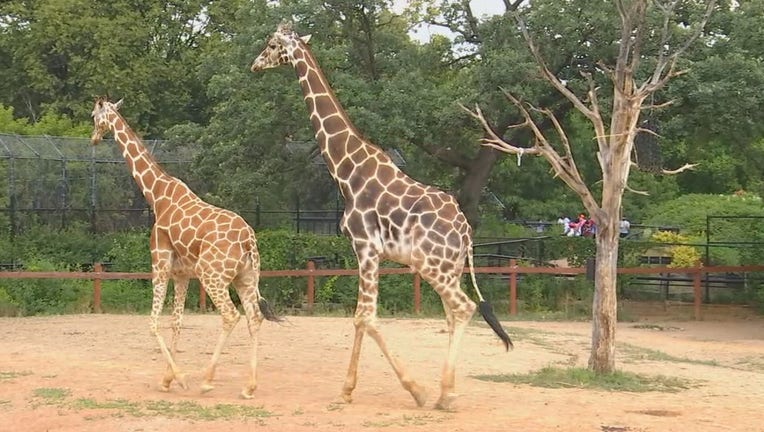 Skeeter the giraffe (right) walks around his enclosure at the Como Park Zoo.

Countless kids and their families have had the chance to help feed Skeeter the giraffe. Somehow, Skeeter recently broke a bone in his hoof and it took a big team effort to help him stand tall again.

Zoo crews walk us through the procedure to help Skeeter the giraffe at Como Park Zoo after he broke his hoof recently.

Zookeepers noticed the 12-year-old giraffe had turned his left front hoof and injured a tendon.

"And Skeeter just didn't seem to be getting better," said Jill Erzar, a Como Zoo zookeeper. "He seemed like he was in more discomfort than he initially was. And we noticed some changes to his hoof growth."

Erzar called in some specialists and took some radiographs of Skeeter’s leg. Sure enough, he had suffered a fracture in his left lateral hoof claw. So, they brought in a team of veterinarians - a big team consisting of 32 people.

"It took almost our entire zookeeper staff and maintenance department just to move him because he’s so large," said Erzar.

It was a team effort to bind his hoof together with a special shoe. While the new shoes on his front hooves aren't very visible, the healing process is underway.

"And the goal is that his claws are splinted together, just like you or I would splint a finger," she said. "So we're using that good claw to kind of support the bad one and hopefully allow that fracture to heal."

The result is a happy giraffe who can once again prance around his habitat.

"I think [his hooves] sound a little funny to him," said Erzar. "So every once in a while he kind of looks like a dog with socks on and he kind of high steps because he's not real sure what's going on down there, but he's doing really well."

Skeeter will keep his new two front shoes for the next 10 to 12 weeks. Then the zoo staff will gather everyone back to take a new radiograph to see how the fracture is healing.