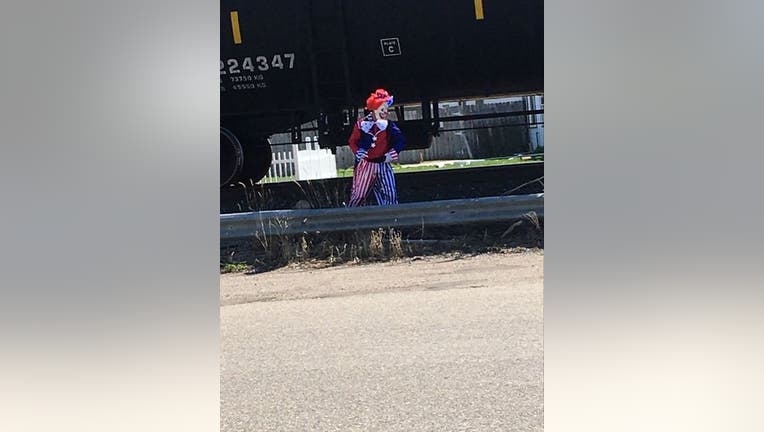 A photo of the clown spotted in Annandale, Minnesota.

"It’s just weird. It’s not a normal thing you see around town," said Katie Daniels, owner of Billy D’s Crooked Tavern in Annandale. "We’ve seen to where the guy is standing in front of somebody’s house making their dog bark and it’s scaring the person, but soon as they get the courage to say something they’re gone."

The community of Annandale, Minnesota issued a warning about clown sightings, leaving some residents unnerved.

For residents like Katie, they’re wondering about the clown’s intentions.

"When I saw him scare the kids I’m like, ‘nope, I’m done. That’s not cool.' He literally ran right by them and these kids are crying because it’s not a normal clown," she said.

However, others in the small town believe the person is out to lighten the mood after a tough year.

"I’m not afraid of clowns," said resident Tinya Porter. "I’m originally from the Minneapolis area and we had a ton of them down there for the longest time. I haven’t heard anything dangerous with him. I think it’s just somebody out having a good time."

Meanwhile, up the road in Maple Lake is a big player in the professional clown industry.

Tricia Manuel toured with the Ringling Brothers, the biggest circus in the country. She’s concerned the person posing as a clown is taking away from their true meaning.

"Real clowns, true clowns are just people who want to bring joy to other people," she said.

She’s retired from the circus but now owns Priscilla Mooseburger Originals, a costume store in Maple Lake. She spends her time mainly creating costumes for clowns around the world. She says clowns get a bad reputation because of bad actors.

"People who like to dress up like a clown and scare people, that is totally against the creed of what real clowns do. The sadness of it is it takes that joy away from a lot of people."

Annandale police said they are aware of the clown sightings, but there are no threats at this time. Any residents who feel threatened should call the non-emergency number.