Sanctuary Covenant Church moved to West Broadway and Lyndale five years ago. They say both at Merwin's and the neighboring Winner's Gas, the shootings and drug use is worse than ever. Within the last week or so, the corner was riddled with bullets with eight people shot.

MINNEAPOLIS (FOX 9) - Every day, all day, there is a crowd hanging out in front of Merwin Liquors on West Broadway, a spot many people call a magnet for gun violence.

"All of their windows are blown out because of shootings that have occurred where people will just drive by and shoot directly into the crowd of loiterers that are in their front entrance," said Andrea Lee with Sanctuary Covenant Church, which shares space with Merwin's.

Sanctuary Covenant Church moved to West Broadway and Lyndale five years ago. They say that the shootings and drug use are worse than ever at Merwin's and the Winner's Gas station across the street. Within the last week or so, the corner was riddled with bullets with eight people shot on the block.

"We are at a place now where the violence is continuing to escalate while at the same time the owners of the two businesses, the liquor store, and the gas station, they seem uninterested in doing anything more than just making money," said Sanctuary Covenant Church Pastor Edrin Williams.

Tuesday, the church started a petition for support, for the city to take a hard look at both Merwin's and Winner Gas, a place some in the community nicknamed "Murder Station." 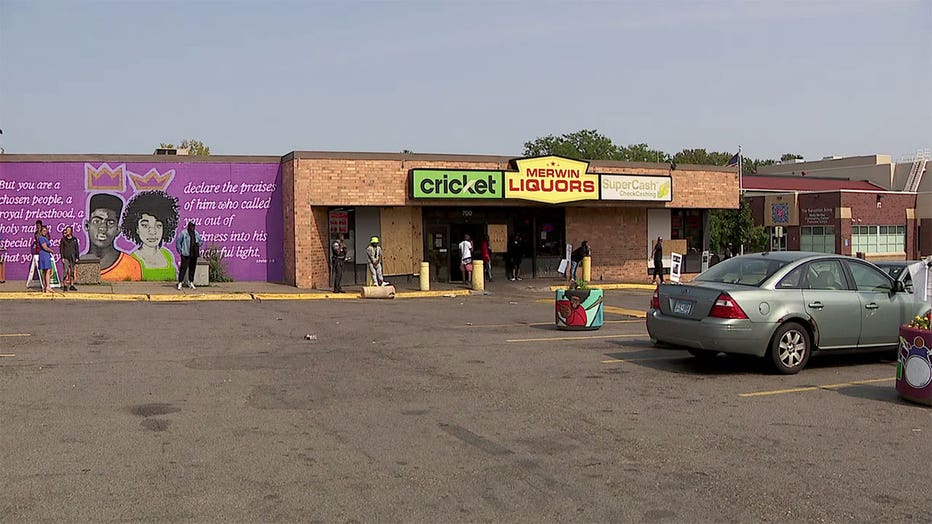 Sanctuary Covenant Church (left) is located next to Merwin Liquors at Lyndale and Broadway, one of the most dangerous spots in the City of Minneapolis. (FOX 9)

"If it can be proven that it’s negligent, we feel like their license should be revoked because the community deserves much better than what we’re getting," said Williams.

We asked the church if they have gotten help from the city. They said they did get a grant which allowed them to put up these mini-gardens to prevent loitering and cement barriers to block the Broadway entrance.

What they haven’t gotten is help from violence interrupters with the city's Office of Violence Prevention.

"I have made inquiries as to why, or the violence interrupters have not been visible at our corner and I have not received a satisfactory answer," said Lee.

Pastor Williams and Lee just want some action, they want the city to step up before another life is taken down.

"All of us are in danger every single day as long as that behavior is happening," said Williams.

FOX 9 asked the city about a license review. They said in part: "The city has engaged with both Merwin’s and Winner’s after the recent events of gun violence to review possible connections of the violence to the business, its security plans and actions available to the City. This investigation is ongoing."

The owners of Merwin's and Winner's could not be reached for comment.