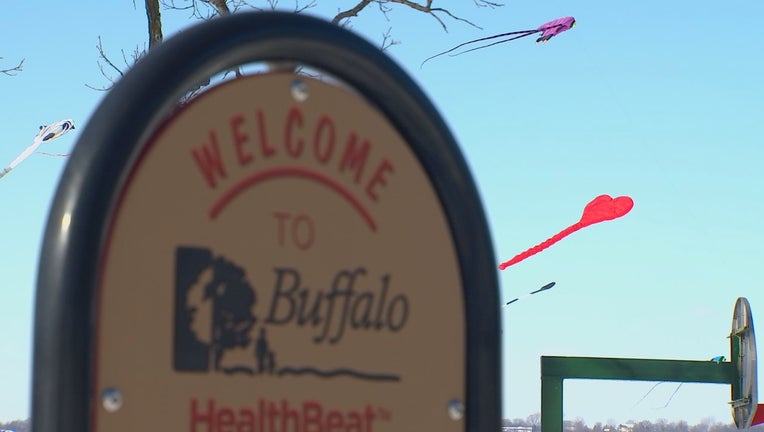 Despite the cold weather, a crowd made it out for Kites on Ice in Buffalo, Minnesota, days after the deadly shooting at a health clinic in the city.

BUFFALO, Minn. (FOX 9) - Buffalo held its third annual Kites on the Ice event Saturday, but things were different this year, as the community begins to heal following a shooting that killed one person and injured four others.

"We’re kind of showing that you know you can’t be brought down and stay down forever," Brian Holthaus said. "At some point, it’s a good time to kind of rise up and bring each other together."

Buffalo held its third annual Kites on the Ice event Saturday. But things were different this year, as the community begins to heal following a shooting that killed one person and injured four others.

"This community is so tight, we know the people, we know the victims, we know that Allina Clinic, we all go to that clinic," Buffalo Mayor Teri Lachermeier said. "It doesn’t feel cold to me, the hearts are warm -- this is exactly what our community needed today."

"This is how much we want to be together here in Buffalo because literally there are hundreds and hundreds of people on a frozen lake on the coldest day in the last five years," State Rep. Marion O’Neill said.

Buffalo’s mayor says the city needs to do three things to begin healing.

"We want to make sure that we’re connecting, we’re showing our care to the people of the Allina Clinic," Lachermeier said. "And for us to continue the conversation because we don’t want people to suffer from the mental health issues."

State Rep. O’Neill has lived in Buffalo for 20 years and said phone calls with law enforcement on Tuesday devastated her.

"This was literally minutes after it happened, and he was one of the first on the scene. He just described it like a war zone," O’Neill said of a phone call with the local sheriff. "He’s never seen anything like it in his entire career as a law enforcement officer."

"It’s crazy, in Buffalo, that [that] happens," Orrin Delaney added.

"It’s a small town, and you don’t expect stuff like that to happen," Tim Hall said.

Donations from the event will go to the Buffalo Hospital Foundation. Outside of St. Francis Xavier Catholic Church there was another fundraising effort in town, too.

"We were just collecting mental health and self-care items, along with donations, just to kind of show some personal support for the community," Madelyn Anderson said.

Click here to learn how you can help support Buffalo.