Jermaine Bell spent more than a year saving money for a birthday trip to Disney World -- but decided to empty his piggy bank to help feed evacuees of Hurricane Dorian, instead.

JACKSONVILLE, Fla. - A young boy who opted out of a birthday trip to Disney World to instead help evacuees of Hurricane Dorian was surprised Sunday with a free vacation to “The Most Magical Place on Earth.”

Jermaine Bell of Jacksonville, Florida, spent more than a year saving money for a birthday trip to Walt Disney World. But as Hurricane Dorian began approaching the South Carolina coast, the boy emptied his piggy bank and bought hundreds of hot dogs, bags of chips and bottled water.

He served them free of charge to evacuees who passed through Allendale, South Carolina, where he was visiting his grandmother. 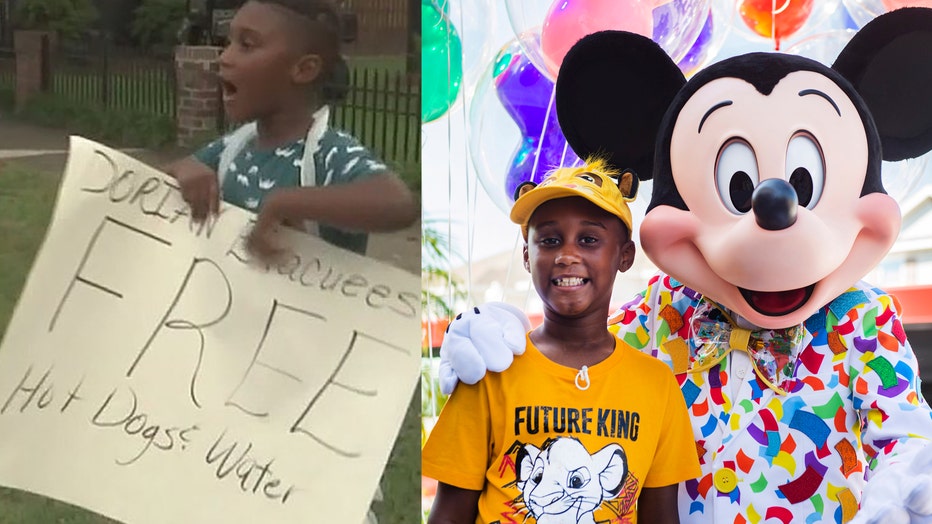 Jermaine Bell is pictured giving away free hot dogs and water to Hurricane Dorian evacuees in South Carolina, alongside an image of Mickey Mouse making a surprise appearance at the 7-year-old’s birthday party on Sept. 8, 2019. (Photo credit: Disney)

“The people that are traveling to go to other places, I wanted them to have some food to eat so they can enjoy the ride to the place that they're going to stay at,” Jermaine said last week.

On Sunday, Jermaine celebrated his seventh birthday and was surprised by Mickey Mouse and a group of Walt Disney World cast members who showed up to share that the boy was going to Disney World after all.

The family will enjoy a VIP getaway at the resort later this month, the company said.