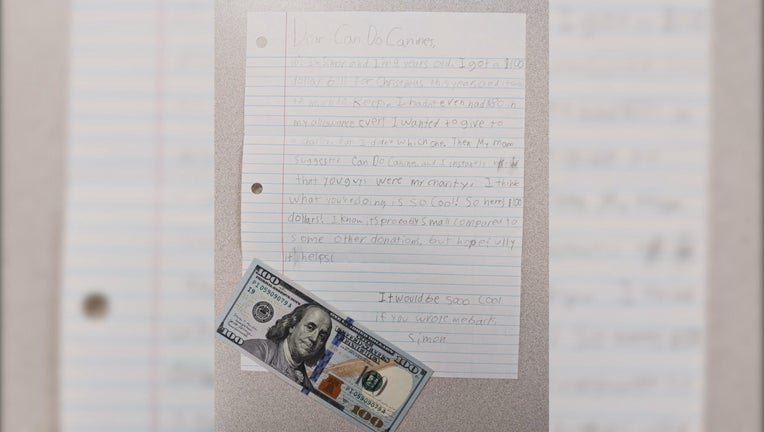 Simon Teece wrote a letter to Can Do Canines, donating the $100 he got for Christmas. Now, that money is going toward helping another boy get a service dog.

NEW HOPE, Minn. (FOX 9) - A Minnesota boy’s donation to Can Do Canines is helping another little boy his age get a much-needed service dog.

It all began with a heartfelt letter and generous donation sent to the nonprofit by a nine-year-old named Simon Teece.

A Minnesota boy’s donation to Can Do Canines is helping another little boy his age get a much-needed service dog.

"I got a $100 bill for Christmas this year, and it was too much to keep," read Simon’s letter in part. "I hadn’t even had $80 in my allowance ever! I wanted to give to a charity, but I didn’t [know] which one. Then my mom suggested Can Do Canines."

The $100 got put to work by Can Do Canines, which provides service dogs to those with disabilities free of charge. The organization depends on donations from those like Simon. Now, the nine-year-old is learning just how far the money goes.

On Thursday, Simon met 10-year-old Drake and service dog Flynn. Drake has cerebral palsy and Flynn is being trained to help Drake.

"I think you know we are here because of one boy’s really big heart and that boy is Simon," said Jeff Johnson, the executive director of Can Do Canines, during the meeting.

This time, Simon was the recipient of a letter -- a thank you from Drake.

"'That money helps for training dogs like Flynn. Thank you, Simon for being so generous, from Drake'" read Simon.

Drake says he is "happy and excited" to be getting the new service dog. He will be training with Flynn this weekend.

As for Simon, he feels he’s getting back so much more than anything he could have bought.

"I thought it was way too much to keep and I knew it would just be better to give it to a charity," said Simon.