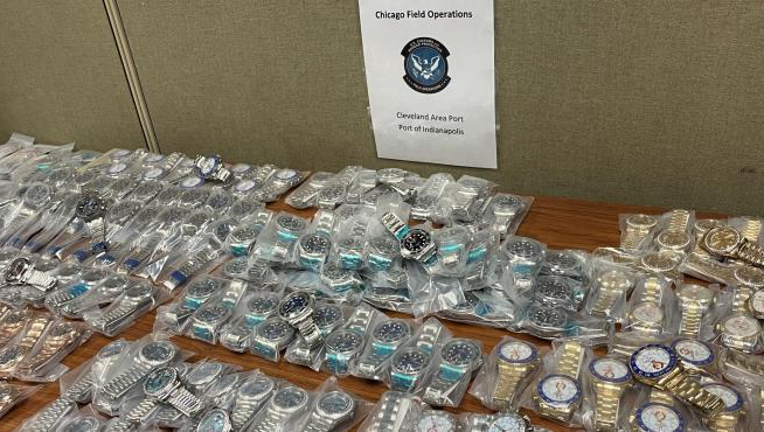 CBP officers in Cincinnati seized a total of 460 counterfeitRolex watches that were arriving from Hong Kong and heading to a residence in Brooklyn, New York. (Credit: CPB)

Officers said the shipments contained 460 watches that were arriving from Honk Kong en route to Brooklyn, New York. They credited the discovery on intelligence gathering and a past history of fraudulent shipments from the vendor.

Agents said if the counterfeit watches were real, they would’ve been valued at $10.1 million based on the manufacturer’s suggested retail price.

"No one buys a luxury brand watch expecting it to fail or fall apart," the agency said in a news release. "As consumers increasingly purchase from online or third-party vendors, our officers are at the frontline to guard against defrauders expecting to make money selling fake merchandise."

CBP said in the entire month of April, Indianapolis officers have seized three shipments of watches valued at $20 million if they were genuine.

"This is just another example of the work our officers do to protect consumers and the U.S. economy," Jeremy Brodsky, Port Director-Indianapolis, said. "Our officers are at the frontline protecting the U.S. economy and guarding against criminals making money by selling fake merchandise."

The agency said the rapid growth of e-commerce makes it easy for consumers to purchase products through online vendors and urge them to be cautious. In response, CBP has established an educational initiative called ‘Truth Behind Counterfeits’ to raise awareness about the consequences and dangers of the purchase of counterfeit and pirated goods.

Consumers who believe they have purchased or have knowledge about counterfeited products can anonymously submit an e-Allegation report to CBP.