Biden's average lead is 9 points in the polls conducted since Sept. 4. His biggest advantage is a 16-point lead in the ABC News/Washington Post poll released Wednesday, while his smallest edge is 4 points, in a Morning Consult poll released earlier this week. Biden enjoyed 9-point leads in three other polls: New York Times/Siena College, CBS News/YouGov, and SurveyUSA.

New polling in Minnesota shows Joe Biden with a lead.

Minnesota, which has voted for a Democratic presidential candidate every year since 1972 but went narrowly for Hillary Clinton in 2016, is seen as a swing state this year. Trump and Biden have both scheduled in-person events in Minnesota on Friday.

"These numbers suggest that as of now -- polls are a snapshot in time -- Biden has an edge in Minnesota," University of Minnesota political science professor Kathryn Pearson said in an interview. "But the Biden campaign shouldn’t assume just because it has a long history of voting for Democratic candidates that it’s necessarily a given that it will happen, even as the state leans Democratic."

Trump is scheduled to do a rally at Bemidji's airport at 6 p.m. Friday. Biden will tour a union training center in Duluth and give remarks, the campaign said without releasing a time.

On average across the five polls, Biden holds a 51-point lead in the Twin Cities urban core. The former vice president holds a smaller lead in the Metro suburbs. But Trump leads in western Minnesota and northern Minnesota, where the two campaign events are scheduled Friday.

Trump's support among white voters without a college degree -- a category he carried by 27 points in 2016 -- has fallen. Across the five polls, he leads by 10 points. Biden holds a large lead among college-educated white voters.

By a 15-point margin, Minnesota voters say they trust Biden to handle the coronavirus pandemic. The former vice president is also favored -- though by a much smaller margin -- on public safety. The two candidates are in a statistical dead heat in every poll over who would be best for the economy.

The economy question has traditionally favored Trump. The president's campaign is airing TV ads in Minnesota this week trying to solidify support for his handling of the economy.

"President Trump is not faring particularly well especially relative to how he had been in the past, in any of these categories," Pearson said. "And I think that’s why we’re seeing across groups (of voters) his number down.

Minnesota is tied for the earliest state in the country for absentee voting. In an average of the five polls, 45 percent of Minnesotans say they will vote early -- either by mail or in person.

Among those who plan to vote early, an overwhelming majority support Biden. A majority of those who say they'll vote on Election Day back Trump. The president has repeatedly said that voting by mail would invite widespread fraud, without providing evidence.

Both campaigns have booked millions of dollars in Minnesota TV advertising between now and Election Day, though the Trump campaign pulled back some of its planned ad spending this week.

Trump's campaign initially reserved $837,000 of time on Twin Cities broadcast stations this week, a number it has since cut back to $326,000. 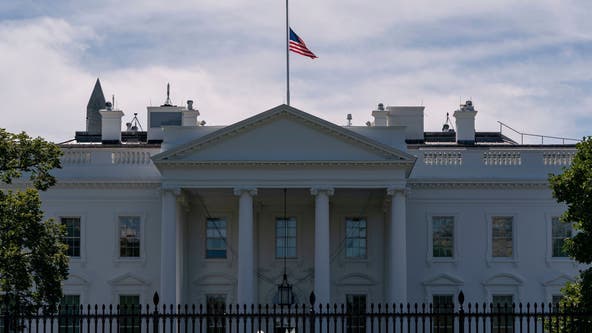