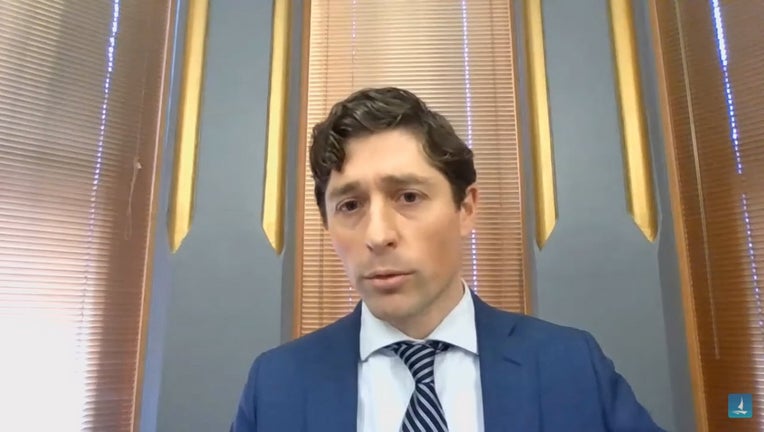 MINNEAPOLIS (FOX 9) - Speaking with Minneapolis City Council members on Monday, Mayor Jacob Frey seemed to admit his campaign made some inaccurate statements when it came to a policy change on "no-knock" search warrants before the death of Amir Locke.

Locke was shot and killed last week by Minneapolis police officers who were executing an early morning "no-knock" warrant to search an apartment off Marquette Avenue. The warrant was in connection to a homicide investigation in St. Paul. Locke was staying at the apartment but was not named on the warrant, FOX 9 learned last week. Another person living at the apartment, who had a past altercation with police, was named, however.

Speaking with Minneapolis City Council members on Monday, Mayor Jacob Frey seemed to admit his campaign made some inaccurate statements when it came to a policy change on "no-knock" search warrants before the death of Amir Locke.

In November 2020, Mayor Frey and then-police chief Medaria Arradondo announced changes to Minneapolis Police Department policy, restricting no-knock warrants in the city. Under that policy, officers were required to announce their presence before crossing the threshold of a residence.

However, in later references to the policy change, including on his campaign website, the policy change was referred to as a "ban" of no-knock warrants. Since the shooting of Locke, the mayor has faced scrutiny from critics and activists accusing him of lying about the policy change.

Mayor Jacob Frey took questions on Monday from city council members in the wake of the shooting death of Amir Locke.

After a protest on Saturday, where some at the rally carried signs reading "Frey lied, Amir died," a spokesperson for Frey told FOX 9: "Mayor Frey’s policy banning the execution of unannounced entries while serving no-knock warrants has been in effect since November 30, 2020. While investigators review this policy in the context of the killing of Amir Locke, the fact remains, Amir Locke was killed. For this reason, Mayor Frey has instituted a full moratorium on receiving or executing any no-knock warrants, announced and unannounced, until the policy can be reviewed by external experts."

Frey told council members that the initial press release and language the mayor used when addressing the November 2020 change for "no-knock" warrants were accurate. But, on the campaign trail, claims he made about the policy change lacked nuance.

"Throughout a campaign, and certainly as more and more outside groups began weighing in, language became more casual, including my own," the mayor said, responding to questions from Councilman Jeremiah Ellison. "Which did not reflect the necessary precision or nuance. And I own that."

Amir Locke shooting: What the future of search warrant execution could look like in Minneapolis

Minneapolis Mayor Jacob Frey said he plans on getting guidance from national experts on how to change no-knock warrant execution in the city of Minneapolis.

"As members of this body know, brevity is a virtue, especially when you are trying to explain something to large numbers of people," Mayor Frey continued. "I believe my language and what we were saying in longer form honored the spirit of this policy change, but there were instances where it did not."

The mayor has since placed a moratorium on the application and execution of no-knock warrants in the state’s largest city, with an exception, for the existence of an imminent threat that would require police chief approval.

The council’s Policy and Government Oversight Committee used its Monday meeting to hear from experts on best practices for no-knock warrants including civil rights attorney Ben Crump who is now representing the Locke family.