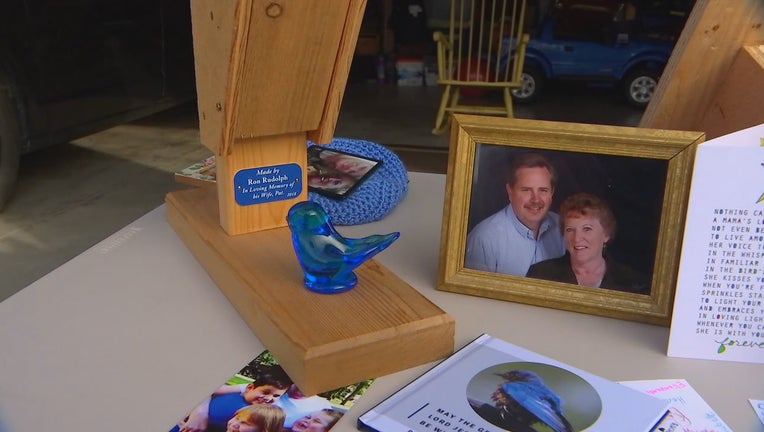 The loss of his wife led Ron Rudolph into a life-changing endeavor.

NEW PRAGUE, Minn. (FOX 9) - Losing a loved one is tough. When Ron Rudolph's wife died three years ago, he was concerned he would also lose himself. Instead, found an outlet for his grief that has started him and his family on a massive project.

But, he never imagined that his creations would not only change his life but so many others.

Losing a loved one is tough. When Ron Rudolph's wife died three years ago, he was concerned he would also lose himself. Instead, found an outlet for his grief that has started him and his family on a massive project.

Three years ago, Ron Rudolph needed hope. He lost his wife Pat to cancer. His house was suddenly empty.

"I found myself alone was having some real bad anxiety and I needed something to do," said Ron. "So I went out to my shop and I started cutting out pieces for bluebird houses."

Using his hands to heal his heart, he soon had twelve bluebird houses. Ron asked his daughter to get rid of them on Facebook.

"I was like, 'Dad you’re going to need to make more,' and he goes 'what?'" recalled Kristy Boike.

There were 100 requests for bluebird houses. But that meant Ron needed help.

With his daughter already on board, he "hired" on his grandkids. Soon, all of the energy spent grieving was now being used to make homes for bluebirds.

But what they didn’t know is that while the wooden boxes were going out, stories of how they were helping would start coming in. letters, books, flags, all with other family stories that begin with loss and end with hope.

"Never in a million years did I dream of how it would be helping others," said Ron.

"I feel like grief in general, it has this isolating feeling," said Kristy. "You’re just really sad and it’s hard to kind of see past that sometimes. But connecting with other people who have experienced that grief and loss together just makes you feel less alone."

Two and a half years in, they’ve sold 5,000 bluebird houses. But Ron and Kristy never set out to make money, so now any profit from the bluebird houses goes to a very special place.

Our Lady of Peace is where Ron’s wife Pat passed away. He can’t say enough about the hospice center and how they cared for his wife. So after overhead, instead of keeping the money, he donates it so they can continue their good work.

"It gives us great pleasure to be able to donate proceeds back to where this all started," said Ron.

And Kristy and Ron’s good work also continues. They hold DIY workshops for Boy Scout troops, daycares, church groups, and assisted living centers. They read all the letters, cherish the gifts and notes of how they’ve helped someone to heal.

"Knowing that everyone kind of has that common thread of loss, no matter where you are in life, it’s been really helpful for our process," explained Kristy.

Ron considers this accidental bluebird business a blessing but Ron says another blessing has come his way.

"I got remarried in October and I met my wife Kathleen at Our Lady of Peace during grief support," Ron said.

From the heart of one man in Minnesota to the hearts of others all around the world now. And throughout the process, Ron, Kristy and the kids never forget the inspiration for it all.

"I can feel her presence with every exchange listening to people share their stories it just helps to have her feel close to us," said Kristy.