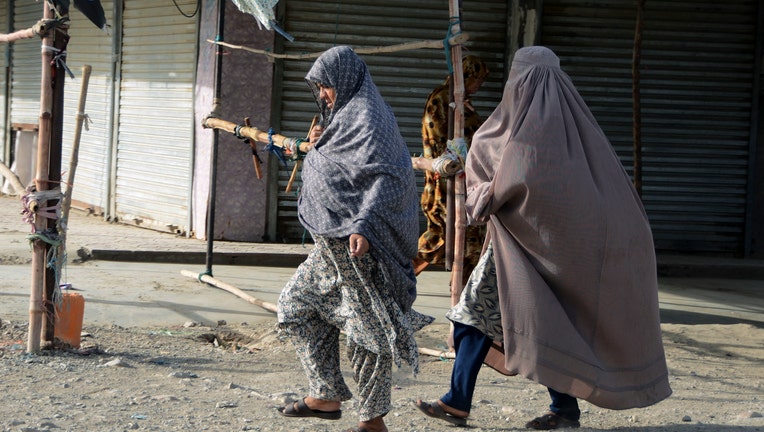 A burqa-clad woman (R) walks along a street in Kandahar on May 7, 2022. - (Photo by JAVED TANVEER/AFP via Getty Images)

KABUL, Afghanistan - Afghanistan’s Taliban rulers on Saturday ordered all Afghan women to wear head-to-toe clothing in public — a sharp, hard-line pivot that confirmed the worst fears of rights activists and was bound to further complicate Taliban dealings with an already distrustful international community.

The decree says that women should leave the home only when necessary, and that male relatives would face punishment — starting with a summons and escalating up to court hearings and jail time — for women's dress code violations.

It was the latest in a series of repressive edicts issued by the Taliban leadership, not all of which have been implemented. Last month for example the Taliban forbade women to travel alone, but after a day of opposition, that has since been silently ignored.

The United Nations Assistance Mission in Afghanistan said it was deeply concerned with what appeared to be a formal directive that would be implemented and enforced, adding that it would seek clarifications from the Taliban about the decision.

"This decision contradicts numerous assurances regarding respect for and protection of all Afghans’ human rights, including those of women and girls, that had been provided to the international community by Taliban representatives during discussions and negotiations over the past decade," it said in a statement.

The decree, which calls for women to only show their eyes and recommends they wear the head-to-toe burqa, evoked similar restrictions on women during the Taliban's previous rule between 1996 and 2001.

"We want our sisters to live with dignity and safety," said Khalid Hanafi, acting minister for the Taliban’s vice and virtue ministry. 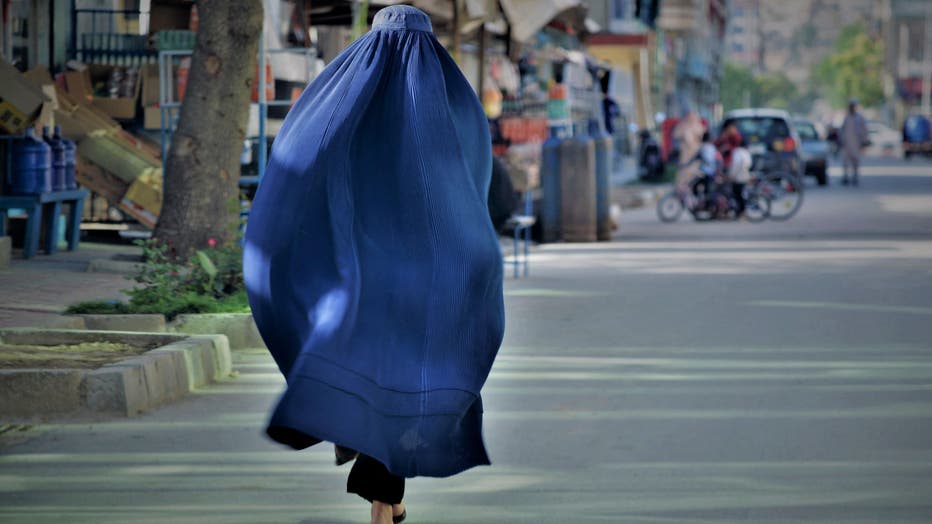 A burqa-clad woman walks along a street in Kabul on May 7, 2022. (Photo by AHMAD SAHEL ARMAN/AFP via Getty Images)

The Taliban previously decided against reopening schools to girls above grade 6, reneging on an earlier promise and opting to appease their hard-line base at the expense of further alienating the international community. But this decree does not have widespread support among a leadership that's divided between pragmatists and the hardliners.

That decision disrupted efforts by the Taliban to win recognition from potential international donors at a time when the country is mired in a worsening humanitarian crisis.

"For all dignified Afghan women wearing Hijab is necessary and the best Hijab is chadori (the head-to-toe burqa) which is part of our tradition and is respectful," said Shir Mohammad, an official from the vice and virtue ministry in a statement.

"Those women who are not too old or young must cover their face, except the eyes," he said. "Islamic principles and Islamic ideology are more important to us than anything else," Hanafi said.

"(It is) far past time for a serious and strategic response to the Taliban’s escalating assault on women’s rights," she wrote on Twitter.

The Taliban were ousted in 2001 by a U.S.-led coalition for harboring al-Qaida leader Osama bin Laden and returned to power after America’s chaotic departure last year. The White House did not have immediate comment on the Taliban's latest decree.

Since taking power last August, the Taliban leadership has been squabbling among themselves as they struggle to transition from war to governing. It has pit hard-liners against the more pragmatic among them.

A spokeswoman from Pangea, an Italian non-governmental organization that has assisted women for years in Afghanistan, said the new decree would be particularly difficult for them to swallow since they had lived in relative freedom until the Taliban takeover. 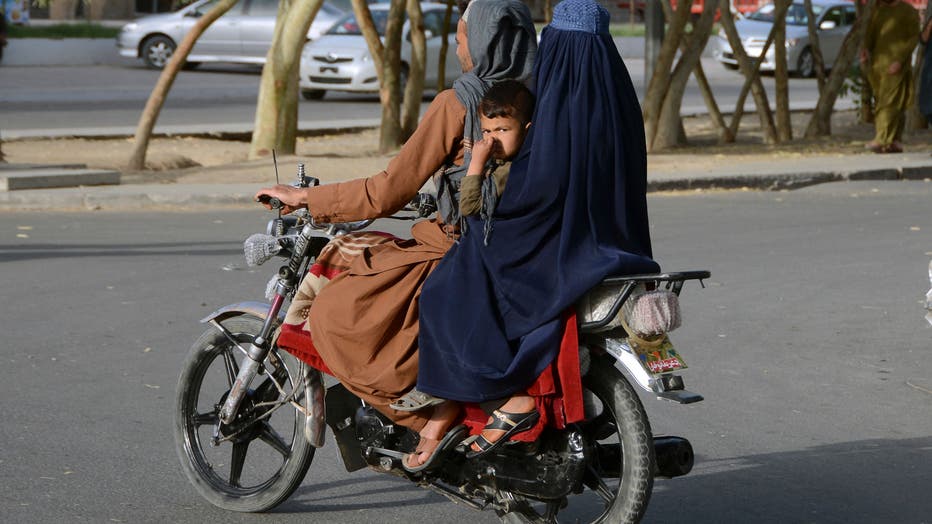 A burqa-clad woman (R) travels with her family on a motorbike along a road in Kandahar on May 7, 2022. -(Photo by Javed TANVEER / AFP) (Photo by JAVED TANVEER/AFP via Getty Images)

"In the last 20 years, they have had the awareness of human rights, and in the span of a few months have lost them," Silvia Redigolo said by telephone. "It’s dramatic to (now) have a life that doesn’t exist,’’ she said.

Infuriating many Afghans is the knowledge that many of the Taliban of the younger generation, like Sirajuddin Haqqani, are educating their girls in Pakistan, while in Afghanistan women and girls have been targeted by their repressive edicts since taking power.

Girls have been banned from school beyond grade 6 in most of the country since the Taliban’s return. Universities opened earlier this year in much of the country, but since taking power the Taliban edicts have been erratic. While a handful of provinces continued to provide education to all, most provinces closed educational institutions for girls and women.

The religiously driven Taliban administration fears that going forward with enrolling girls beyond the the sixth grade could alienate their rural base, Hashmi said.

In the capital, Kabul, private schools and universities have operated uninterrupted.