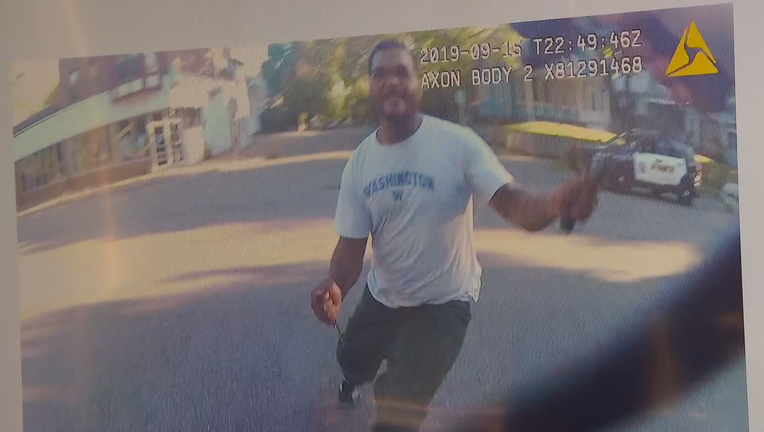 ST. PAUL, Minn. (FOX 9) - The St. Paul Police Department released the bodycam video from the officer-involved shooting that left a man dead Sept. 15. Now, activists with the Anti-Police Brutality Coalition are speaking out, asking for an independent investigation into the death of Ronald Davis.

The incident began shortly before 6 p.m., when Davis rear-ended a St. Paul police squad car near the intersection on Thomas Avenue West and North Griggs Street.

Mayor Melvin Carter and Chief Todd Axtell lend their reactions to the video made public for the first time Tuesday.

According to the Minnesota Bureau of Criminal Apprehension and St. Paul police, both men exited their vehicles and Davis confronted the officer, identified as Officer Steven Mattson. Davis ignored repeated commands to drop the knife and at one point during the encounter, Mattson fired his weapon, killing Davis.

According to a release from the coalition, activists are concerned with "the history of corruption within the St. Paul Police Department, as well as the Bureau of Criminal Apprehension."

Activists are calling for an independent review of all video footage available in this case, including the full body camera video, any dash cam video, street cameras, and any other surveillance footage.

Activists are calling for an independent review of all video footage available in this case, including the full body camera video, any dash cam video, street cameras, and any other surveillance footage.

"It is unclear from the limited body camera footage what types of de-escalation tactics were used by Officer Mattson, why he fell to the ground, why his flashlight fell, and whether he attempted to use nonlethal force before using deadly force against Ronald Davis," the coalition wrote in the release. "The public also has a right to demand an independent investigation in police shooting cases in Minnesota, given the relative frequency within which they have been occurring the disproportionate rate of Black men and other men of color being killed by police. Beyond that, there have been allegations of corruption within the St. Paul Police Department and the BCA for many years and those concerns have not been taken seriously by Governor Walz or other elected officials."

The group also said they have concerns about recent statements made by St. Paul Police Chief Todd Axtell. They said Chief Axtell "took aim at local activists who have justifiably called into question to corruption and violence of St. Paul Police officers who have violently attacked residents in the past, allowed police dogs to viciously bite and disfigure African American community members, who over criminalize the Black community, who have engaged in racial profiling and harassment, and who are not consistently held accountable for their actions."

"The Chief’s irresponsible and inaccurate statements incite racist comments and harassment from trolls and negativity and disdain from the white community towards those who are fighting for justice, raising critical questions, and protesting the toxic culture of policing in St. Paul and throughout the Twin Cities of Minnesota."

The group is demanding the following:

"For more than 30 years, I’ve built my career on a foundation of trust, truth and transparency. That’s not to say that I, or any member of our department, is perfect. When we make mistakes, the Saint Paul Police Department has a proven record of taking responsibility. However, this is not one of those times.
And while I recognize the trauma that has been caused by a history of policing practices, throughout our country, that have disproportionately affected communities of color, I also cannot stand by—I simply can’t sleep at night—knowing that a good officer, and all of our officers, are being assailed by people who don’t have the facts.
This video is difficult to watch, and my heart goes out to the family of Mr. Davis. I deeply understand that anytime a loved one is lost, it’s tragic—regardless of circumstance. The only solace I can take from this incident is that Officer Mattson was not seriously injured or killed. But I do know that his life will never be the same.
I remain hopeful that quickly releasing this video will allow us to move forward with mature discourse about how such tragedies can be prevented in the future—without having to wade through the waters of irresponsible accusations of murder, calculated cries of injustice, and threats made against an officer who had no choice but to defend himself against an immediate and violent attack.
Officer-involved shootings are serious and must be dissected and analyzed so that we can understand and address their causes. Continuing to swim in a sea of lies and distorted facts will only keep us caught in the undertow of distrust.
Wearing a badge does not automatically make you wrong any more than standing in the street with a megaphone automatically makes you right.
I look forward to continuing to move forward together, in good faith, to achieve the outcomes we all desire."