AUGUSTA, Wis. - A young boy headed to his first day of school and anxious about riding the bus for the first time was comforted thanks to a small yet touching gesture by his bus driver.

Axel, headed to his first day of 4-year-old kindergarten in Augusta, Wisconsin, was “super excited” until it was time to get on the bus, according to his mother, Amy Johnson.

Johnson said when the bus came around the corner, Axel suddenly got really quiet — and when the bus door opened, he started crying.

“I picked him up and got him on bus,” she explained. “He started to cling to me and I told him, ‘Buddy, you got this and will have so much fun!’”

That’s when his bus driver, Isabel “Izzy” Lane, stuck her hand behind the seat and offered comfort to the young rider, telling him he’d be okay on his journey to school.

Johnson snapped a photo of the touching moment with her son, who was aiming to get that perfect first day of school picture whether he was crying or not.

“I love that people in my community are kindhearted and Izzy is definitely that,” Johnson said of her son’s bus driver. 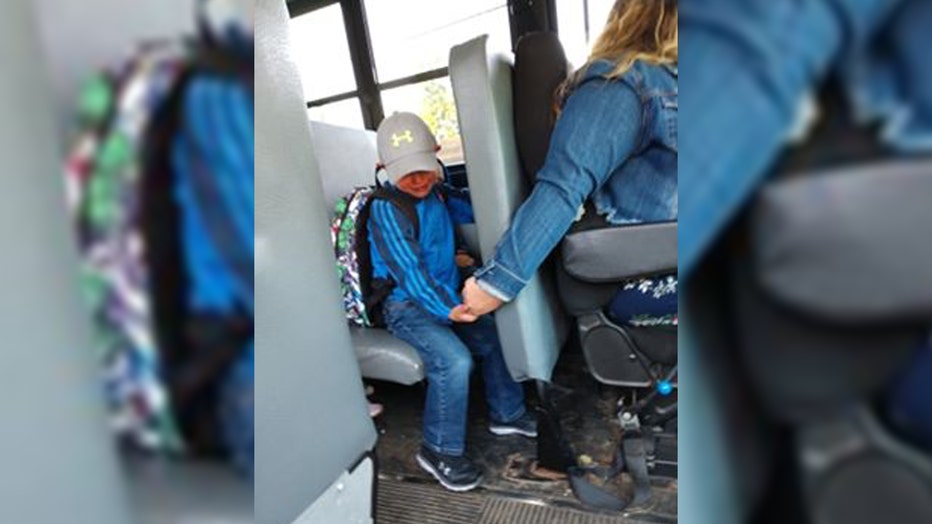 Amy Johnson, Axel’s mom, snapped the quick photo after her son got on the bus, feeling those first day of school nerves. (Photo credit: Amy Johnson)

The photo of Axel being comforted by his bus driver was shared on social media, including by the local Augusta Police Department, who said it was “so fortunate” to be able to partner with school staff like Lane.

“The compassion we see every day in our teachers, bus drivers, custodians, administration, food service staff, and paraprofessionals is truly admirable,” the department wrote.

The simple act of kindness went a long way for Axel. He stopped crying before the end of the road that first day, and now gets on the bus each day ready to go to school, which he “loves," according to his mom.

"I think it kind of goes for anyone, if you see someone maybe struggling just to do something as simple as reaching out a hand and showing that you are there,” Lane told WEAU-TV. “You don't have to say anything but just to show someone you are there makes a big difference in someone's day.”

RELATED: ‘I will be your friend': 6-year-old boy to wear shirt with sweet message on his first day of school