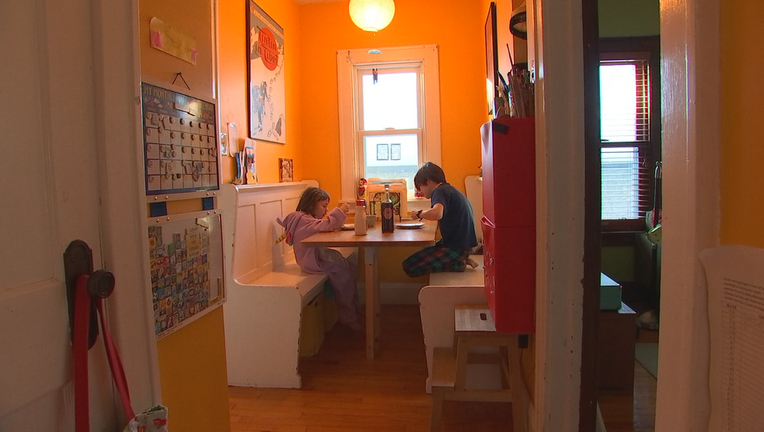 (FOX 9) - There’s always something to worry about.

For Mary Kosuth, even breakfast with her two children, Oscar and Ingrid, is fraught with second guessing, right down to the plastic cap on a bottle of syrup.

Most plastic today is found in packaging of all kinds. And many single-use plastics, like grocery bags, are recyclable, but not if consumers mix them with other plastics.

“Sometimes you need a knife to cut around. I honestly worry about what may be falling in when I’m doing that,” she said in the kitchen of her cozy South Minneapolis home.

From yogurt containers, to frozen food, and bottled water, it can seem like the world is wrapped in plastic.

“As you know, plastic is everywhere,” Kosuth said. “It’s very difficult to avoid. We try to do the best we can.”

It is not just a mother’s obsession, it’s also an occupational hazard.

Kosuth is a research scientist at the University of Minnesota, studying the tiniest bits and pieces of plastics, known as microplastics.

“I tested snow from my backyard. And subsequently told my children don’t eat the snow anymore,” she chuckled.

When a special dye is added, the shards of plastics become bright red under a microscope.

Kosuth’s research has also found microplastics in tap water from the Great Lakes, beer and salt.

Other studies have identified microplastics in bottled water, tiny plastic microbeads from make-up, toothpaste, and microfibers in the clothes we wear.

There may also be microplastics in the tea you drink.  Canadian researchers discovered some premium tea bags, made from a fine plastic mesh, shed more than 14 billion microscopic particles of plastic when hot water is added, according to a McGill University study.

A microplastic is anything smaller than a pencil eraser.  But most are much smaller, take the other end of the pencil, the tip of the lead.  If you divided it up into a thousand equal parts that is the size of many microplastics.

At the Great Lakes Observatory in Duluth, a team of chemists is studying microplastics found in the stomach and intestines of fish caught in Lake Superior, and along the beaches of the Apostle Islands.

“Everywhere we’ve tried to look for them we find them,” Dr. Katie Schreiner said.

Microplastics were recently discovered in the pristine Boundary Waters, in the deepest waters of the Mariana Trench, as well as the Arctic Circle, and the Pyrenees.

And yet, the original source of this pollution is still a mystery, because the plastics are so small, scientists can’t pinpoint one particular primary source.  At the Great Lakes Observatory scientist are using mass spectrometry to identify the precise composition of these particles.

The concern isn’t just the plastic itself, but chemical hitchhikers, like PCB’s (polychlorinated biphenyls).

“Plastics are great at absorbing those chemicals. They act as a really great sponge,” Dr. Melissa Mauer-Jones said.

“The area that worries me is very small microplastics that can cross a gut barrier, or a blood-brain barrier,” Minor commented.

According to the World Health Organization (WHO), the impact on humans from microplastics is largely unknown, but additional research is warranted.

At this point, many researchers believe larger microplastics may simply pass through humans.  Researchers have found the micro-sized plastic pieces in human feces.

“The smaller particles are where we may not have as much information about whether or not things are actually going across the gastrointestinal tract and getting absorbed that way,” said Dr. Zeke McKinney, who studies environmental contaminants for HealthPartners Occupational Medicine.

The first plastic polymers were developed back in 1907 and production exploded after World War II.

Most plastic is made from petrochemicals that simply break down into smaller and smaller fragments, but never disappear.

The world has produced nearly eight billion tons of plastic, more than a ton for every human being alive, according to an analysis from the University of Oxford.

Production of the most common plastic, polyethylene, is expected to grow by 40 percent in the next decade, according to S&P Global.

In Minnesota, only about 20 percent of plastic is recycled.  About a third of all plastic goes to the incinerator, and 45 percent goes into landfills, according to the Minnesota Pollution Control Agency (MPCA).

At the Dem-Con plant in Shakopee, a robot guided by artificial intelligence helps sort plastic.

But it is human behavior causing most of the problems.  Bill Keegan, president of Dem-Con, showed the FOX 9 Investigators a line of workers at a conveyor belt removing single use plastic bags as recyclable hurtle pass them.

“They’re removing plastic film which we do not want in the bin and it ends up plugging up our system. Ultimately, it does not get recycled and ends up in a landfill,” said Keegan.

Most plastic today is found in packaging of all kinds. And many single-use plastics, like grocery bags, are recyclable, but not if consumers mix them with other plastics.

“We have a lot of single-use plastics and we are making choices as consumers to purchase those products that are not recyclable,” he commented.