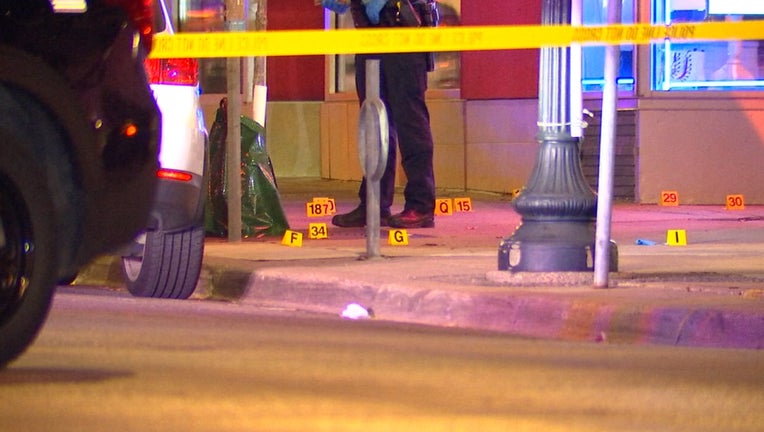 Police investigate the shooting overnight along the 1400 block of Lake Street in Minneapolis. (FOX 9)

MINNEAPOLIS (FOX 9) - The City of Minneapolis endured another violent night Saturday into Sunday morning as 11 people were shot in seven different incidents across the city.

11 people shot in 7 incidents over weekend in Minneapolis

The City of Minneapolis endured another violent night Saturday into Sunday morning as 11 people were shot in seven different incidents over the course of nine hours across the city.

At about 12:50 a.m on Saturday., police responded to a hospital for the report of a male victim with a non-life-threatening gunshot wound.

The man claimed he couldn't remember the exact location where he was shot but said he had been robbed and was shot when he fought back.

Shortly after 1:30 a.m. on Saturday, police responded to a ShotSpotter activation along the 2900 block of 27th Avenue South. Shortly after, a man arrived at an area hospital with gunshot wounds.

The investigation into that shooting is ongoing. The victim is expected to survive his injuries.

According to the Minneapolis Police Department, the violence started around 6:30 p.m. on Saturday when a woman was reportedly shot on Bryant Avenue North. As police responded for the report of a ShotSpotter activation on the 2300 block of Bryant Avenue, a woman showed up at North Memorial Hospital. As of Saturday night, police said she was listed in critical condition. Further details about the victim or the circumstances of the shooting have not been released.

Nearly three hours later at 9:17 p.m., police responded to a man who had been shot in the area of Gold Medal Park on the 1100 block of 2nd Street South in downtown Minneapolis. Police say that victim was seriously hurt in the shooting.

At 11:40 p.m., officers responded to calls of multiple gunshots along the 1400 block of Lake Street West in Uptown. At that scene, police found two victims, a man and a woman, who had suffered non-life-threatening injuries. They were transported to the hospital for treatment.

The shooting also shattered windows at a nearby nail salon, forcing them to close up shop for the coming days.

At about 1:50 a.m. on Sunday, police responded to the area of 7th Street and 1st Avenue South for gunshots. At the scene, they found two people who had been wounded by gunfire, a man and a woman. Both are expected to survive their injuries.

A third victim was also later found with serious injuries from being shot. That man is being treated at a hospital as well. He is listed in critical condition.

In this shooting, police say they booked two men, ages 22 and 25, on charges.

Finally, shortly after 3 a.m., police responded to more shots being fired, this time along the 2400 block of 10th Avenue South.

At the scene, police found two vehicles crashed in the roadway, but with no one inside. But, about a block away, police found a man with a gunshot wound.

Shortly after, police received a report of another man who arrived at Hennepin County Medical Center with a gunshot wound as well.

Both victims are expected to survive their injuries.