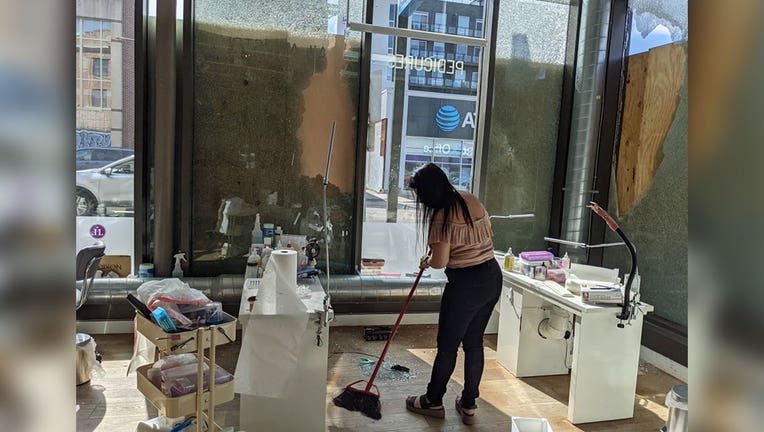 Workers were cleaning up on Sunday at Little Luxuries after shots were fired overnight near the nail salon along Lake Street in Uptown. (Little Luxuries / Supplied)

MINNEAPOLIS (FOX 9) - The owners of a Minneapolis nail salon best known for doing Suni Lee's nails for the Olympics say they are temporarily closing up shop after an overnight shooting damaged their storefront in Uptown.

In a Facebook post, Little Luxuries Nail Lounge says the shots that were fired overnight not far from their business shattered the front windows, leaving them without a safe place to work.

"Please bear with us as we are reaching out to all clients scheduled for this week," the owners write. "We are currently unsure of when we will be open for business again."

Photos sent to FOX 9 by the salon show the front windows smashed by gunfire after the late-night shooting. Minneapolis police responded around 11:40 p.m. on Saturday for reports of multiple shots fired on the 1400 block of Lake Street. Video from the scene showed most of the investigation focused on a shop across the street from Little Luxuries.

Two people, a man and a woman, were reportedly injured in the shooting but both are expected to survive their injuries.

The salon is now looking for help repairing and replacing the windows.