A blast of arctic air combined with strong NW winds makes for a frigid Monday. Don't expect high temperatures much above 10 degrees tomorrow -- 20 to 30 degrees below average across the state.

(FOX 9) - After a quick dumping of snow Saturday evening into Sunday morning, temperatures are expected to drop to single digits Monday, re-freezing much of the melt. The forecast becomes less about snow, and more about the cold and the wind chill.

A blast of arctic air combined with strong northwest winds makes for a frigid Monday. Subzero temperatures will stay through Monday afternoon with winds gusting 20-40 miles per hour. As an added bonus -- don't expect high temperatures much above 10 degrees Monday as temperatures will be 20 to 30 degrees below average across the state. 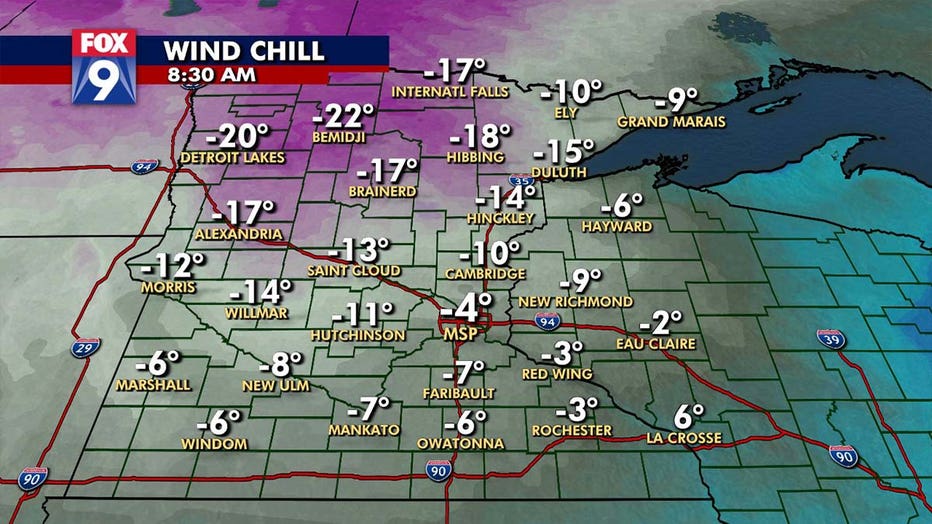 Temperatures above freezing Sunday afternoon will lead to melting/sloppy snow conditions on the roads. The Twin Cities may have a few snow showers Sunday evening, but the bulk of the snow stays in northern MN.

As this storm system exits, it will expose Minnesota to strong winds and frigid, cold temperatures. Strong winds with cold temps combined with wet/slushy streets may lead to a flash freeze on the roads. Expect some sunshine on Monday, but roads will be icy, and wind chills will make it feel below zero for the majority of the day!

"We’ll be monitoring thing and keeping a close eye but in the Twin Cities metro, all roads have really returned to dry driving conditions," Anne Meyer, a representative with the Minnesota Department of Transportation said Sunday.

Spots that are still wet could be slippery during Monday morning’s commute marking one of the first times drivers have had to worry about winter-like weather this season.

"It’s really been a dry, warmer start to the winter, but we know mother nature will come back with a vengeance at some point," Meyer said.

Vengeance Sunday came in the form of high winds. Wind gusts were to blame for the cancelation of the Nature Illuminated event at the Minnesota Zoo Sunday. The Excelsior Christkindlsmart also canceled the last day of their event, citing a wind advisory from the National Weather Service.

Meanwhile, some parts of the state saw a hefty amount of snow overnight Saturday, while areas in the metro saw about an inch of snow. State Patrol reported at least 261 crashes between Saturday evening and late Sunday morning.

Winter lovers had some of their first chances to play in the snow this season, even if conditions were far from ideal.

Skiers were glad to finally see some snow on Sunday.

"The snow is a bit slushy and slow, but it just feels good to be out here on skis finally," Teagan Gillard, member of the Spring Lake Park/St. Anthony ski team said.

Gillard and her teammates are practicing on snow Sunday for the first time of the season. Their first meet is coming up on Wednesday.

"I was really excited I’m ready to get back out and ski again," teammate Mara Larson said. 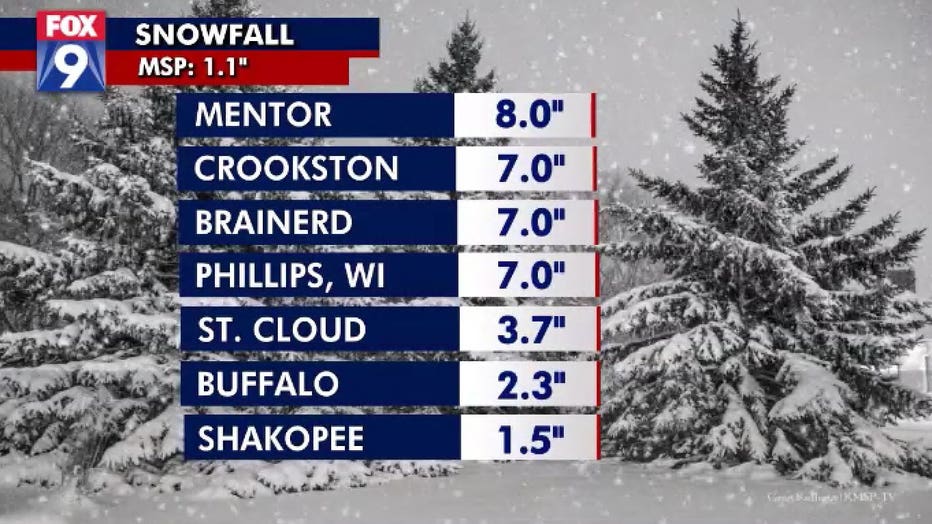