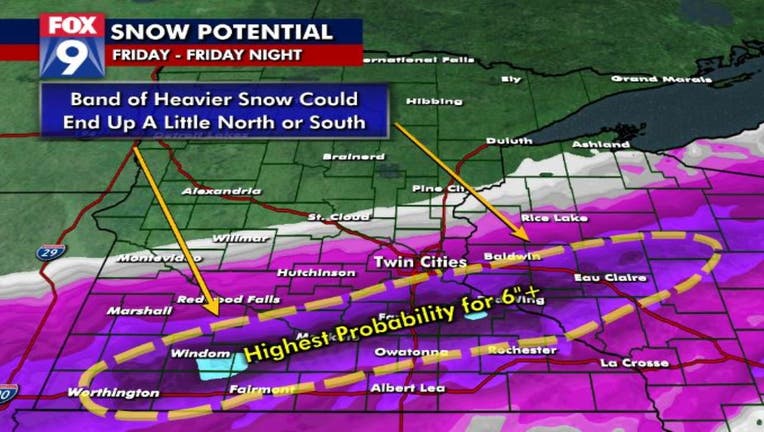 Snow arrives in the state on Friday.  (FOX 9)

(FOX 9) - By now you've probably seen that snow is likely from the greater Twin Cities metro and points southward Friday and Friday night. And if you've perused social media, you have been subjected to the wild variety of forecasts from varied legitimate and not so legitimate sources predicting anywhere from 0-78 inches of snow. Most of these posts talk a lot about the possibility of the most extreme events happening in a glorified fantasyland leaving you mystified, and maybe a little confused, on an actual forecast for your location. Well, let me help put your mind at ease.

First off, it's December in Minnesota; it's going to snow at some point. So, the shear mention of snow shouldn't have you waving the white flag. Second, Friday's storm will not be anything we haven't seen before. At least a few inches are likely for much of the southern half of the state, but it's not going to be an epic storm of biblical proportions. It actually looks like a pretty "standard" December style storm, with one exception. It's that exception that is giving us some trouble on narrowing down where the heaviest snow will fly.

It may be less than 24 hours away from the flakes developing, but our upcoming storm still hasn't formed yet. The energy that will eventually form our low pressure and associated snow is just now rolling on shore into California. But the big difference with this particular system, is that it's not just one piece of energy that will make up our storm, it will be 3. The main piece is the one coming on shore in California early Thursday. That energy though will merge, or fuse, with two others: One off the Coast of British Columbia, and the other off the coast of the Baja of California. These pieces will cross the Rockies and eventually merge in Colorado early Friday, but until they do, an exact storm track is tough to narrow down. 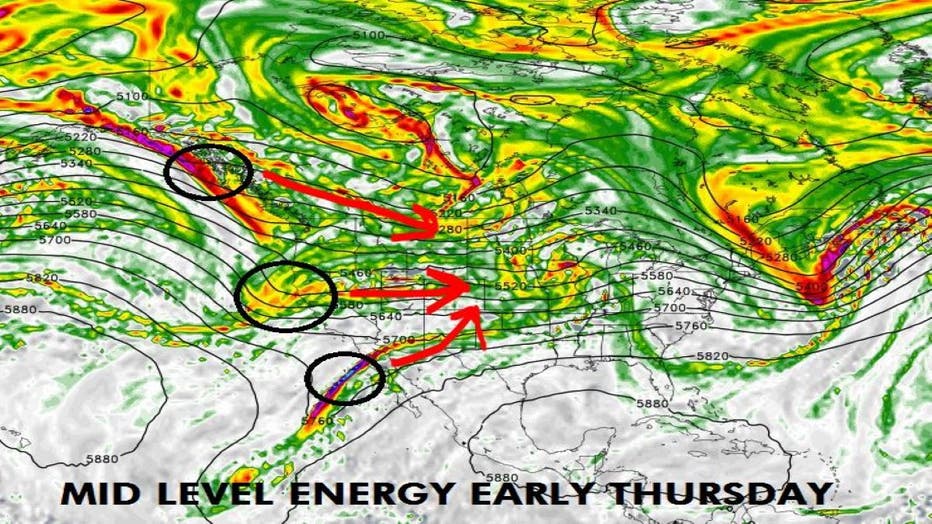 The energy for Friday's storm is still off the coast of the Western U.S.  (FOX 9)

One reason is that these pieces of energy are still offshore. This means that they aren't currently hitting data points that are pulled into computer models. Weather balloons are launched twice a day from roughly 100 locations across the U.S. Data is also recorded from commercial aircraft flying all over the world along with a host of other sources. Well, with these energy centers still offshore, the weather balloons can't measure them, and the lack of international air travel thanks to Covid has fewer flights flying through them. So the sparse measurements can have an impact on how the computer models "see" these areas and can lead to shifts in the expected forecast once they roll on shore. 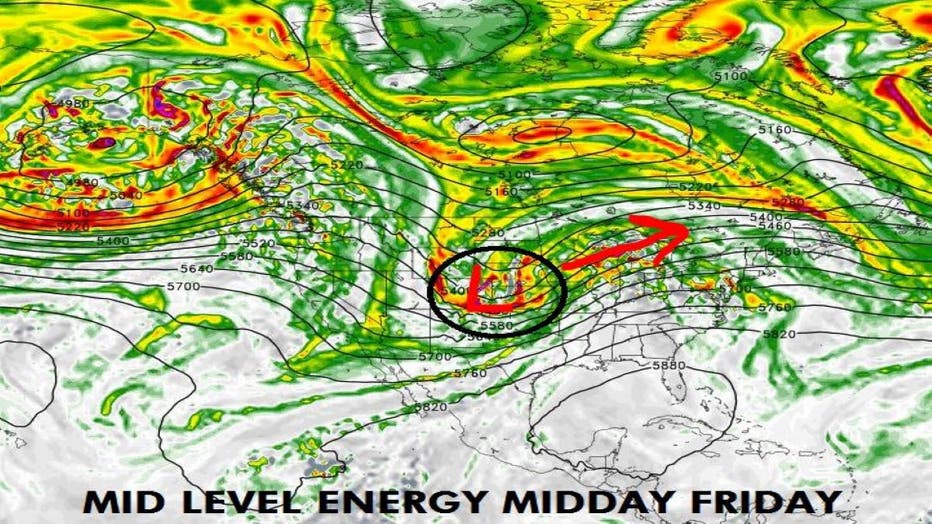 Eventually these three areas will move inland and merge somewhere in Colorado, but exactly how they combine and what that does for the location and intensity of our snow band is not totally known.

Eventually these 3 areas will move inland and merge somewhere in Colorado, but exactly how they combine and what that does for the location and intensity of our snow band is not totally known. Quite likely there will be a band of heavy snow with 8"+ for some, but does that include parts of the Twin Cities, or does it stay in southern Minnesota? That is the million-dollar question. What is almost for certain, is that there will be a LARGE gradient in snowfall totals over a short distance. For example, this storm has the potential to drop 4" of snow in Burnsville, on the north side of Dakota County, but 10"+ in Northfield on the south side of the county. That can make it tough to communicate an exact forecast for all areas because snow totals will vary wildly as you drive just a short way down the road.

One thing that's all but certain though... for those of us that live from the Twin Cities southward, gas up that snow blower because you'll probably need it for varying degrees of clean up on Saturday.