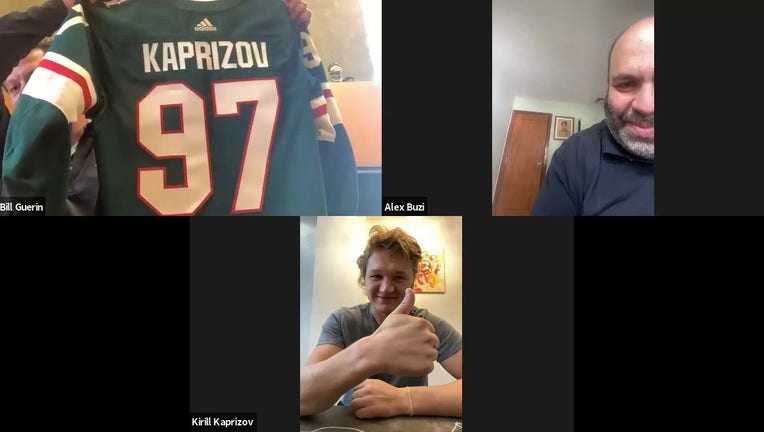 MINNEAPOLIS - The Minnesota Wild is only three days into its training camp, but one sequence in practice at TRIA Rink has the team and fans already buzzing about Russian star prospect Kirill Kaprizov.

Skating and puck possession drills are nothing new for the Wild. But on Wednesday, Kaprizov did a spin move with the puck, got around captain Jared Spurgeon and put a shot on net. In another sequence, he skated past veteran Ryan Suter.

The Minnesota Wild is only three days into its training camp, but one sequence in practice at TRIA Rink has the team and fans already buzzing about Russian star prospect Kirill Kaprizov.

"I think you can definitely see his skill level. You can see he’s got a knack for scoring. He’s going to be an exciting player for us for a long time," Parise said.

The Wild’s newest star prospect signed a two-year, entry-level contract with the team back in July. They were hoping to have him in the Edmonton bubble, but he arrived to the Twin Cities shortly before training camp and got individual skating sessions in before group workouts started at TRIA Rink.

Kaprizov said other than some language barriers, so far so good after three days of practice. The Moscow native is still learning English.

The Wild drafted Kaprizov in 2015, and he’ll wear No. 97 for Minnesota this season. With his arrival comes big expectations.

Kaprizov had 62 points, including 33 goals, a plus-32 rating, six power-play goals and six game-winning goals in 57 games last season with CSKA Moscow in the KHL. He set career-highs in goals, even-strength goals, assists, points and shots on goal. The Russia native led the KHL in goals for the second straight year, was third in scoring and led his team in power-play goals.

Dean Evason knows his game carries expectations, so what’s his message to Kaprizov before the season?

"Literally tell him to compete every night. Just compete and that’s it. We’re not going to get too much deeper than that, " Evason said. "He’s played pro hockey, and you see his battle level out there, you see his strength and he’s going to put himself in a position with that work ethic to have success. Once that happens it’s going to translate to success for us."

It’s only been three days of camp, but Evason said it’s pretty clear what stands out about Kaprizov.

"I can speak to his work ethic, the way that he’s competing in the first three days here," Evason said. "What stood out for us as a staff is how he’s battled and competed in the first days of camp here."

Away from the ice, Kaprizov is getting settled in his new home and trying to stay busy amid the COVID-19 pandemic. He mainly stays home, only leaves to get groceries and has found a few Russian and Ukranian food spots that feel like home.

His NHL debut will come next Thursday night with the Wild at the L.A. Kings, but he’s trying not to think about it too much. It’s a moment the organization and fans have been waiting for since 2015.

"The closer we get to games, I’m sure I will have nerves but everyone goes through them, everyone overcomes them so I’m excited to get out there and get the first game under my belt," Kaprizov said.

Evason said Wednesday the Wild will hold scrimmages on Friday and Sunday, with the regular season opener next Thursday night. They will include NHL officials, and consist of three 15-minute sessions. He’ll have a heavy emphasis on the power play.