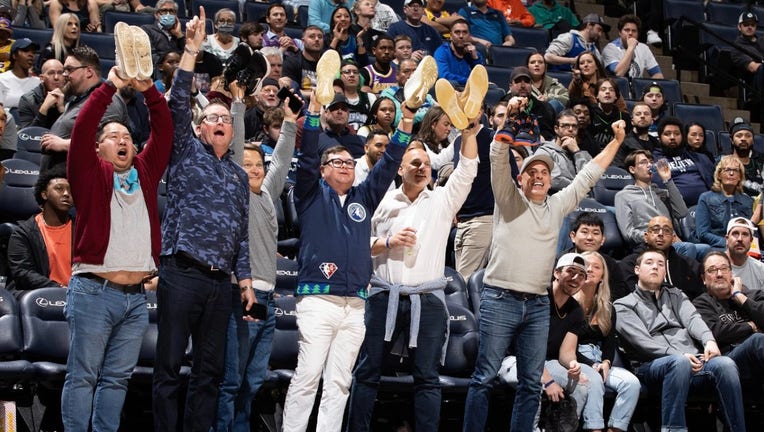 MINNEAPOLIS - The Minnesota Timberwolves are having fun these days and there’s a lot to celebrate, something that hasn’t been said very often for the better part of the last two decades.

The Timberwolves are 41-30 after beating the L.A. Lakers Wednesday night at Target Center. The win guaranteed them a non-losing regular season for just the second time since 2005. The other time came in 2017-18, during the Tom Thibodeau and Jimmy Butler days.

It finally feels like there’s some consistency and stability in a franchise that’s lacked it for so long, and it’s being led by Karl-Anthony Towns and Chris Finch. During the fourth quarter of the win over the Lakers, Wolves’ owner Marc Lore and a few sitting court-side with him took off their shoes and saluted players with the win in-hand.

It’s become a new tradition, started by Towns after a franchise-record 60 points against the Spurs. He took off his shoes in the fourth quarter, signifying his night was done and the game was over.

The Timberwolves, mainly Anthony Edwards, talked extensively Wednesday night about having "swag." Patrick Beverley taunted LeBron James, the Lakers’ bench and pointed to his nose to call Russell Westbrook "trash." Towns collected a Westbrook air ball, then looked around like he was blinded by the shot and couldn’t find it.

This is not your Timberwolves’ squad that limps through a season, and plays meaningless games in March. This is a team that’s cocky, confident and has won nine of its last 10 games. They’ll be in the Western Conference Playoffs, and if they can’t chase down the Denver Nuggets for the No. 6 spot in the final 11 games, they could game a home game for the play-in series.

Ever since D’Angelo Russell called out the "quiet-ass fans" Target Center has been at near capacity most nights to see the Timberwolves in-person. It should be that way again Saturday afternoon as the Wolves host the Bucks, last year’s NBA champions. The Timberwolves have gone from an afterthought, to must-see TV and one of the hottest sports tickets in town.