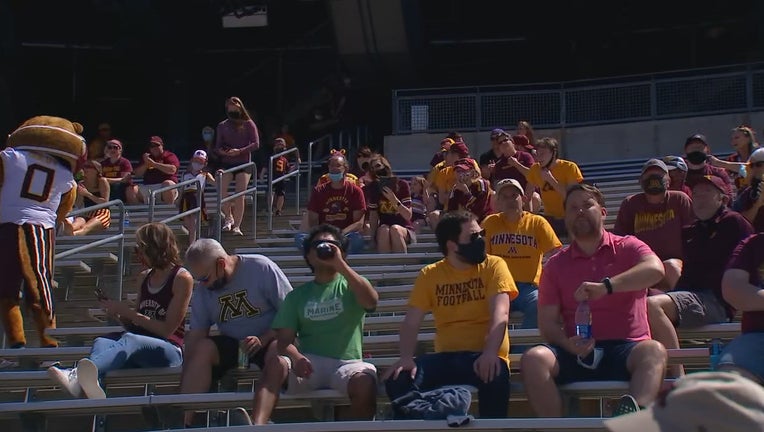 MINNEAPOLIS - Governor Tim Walz on Thursday announced a comprehensive plan to end all COVID-19 restrictions in the state of Minnesota by July 1.

The first phase of that plan removes limits for outdoor events, and ends curfews for bars and restaurants starting Friday. Other capacity and social distancing measures could end as early as May 28. Minnesota’s mask mandate could also be lifted by July 1, or sooner, if the state reaches a 70 percent vaccination rate.

So what does it all mean for Minnesota sports? More fans are likely to be back in the stands. Here’s a quick glance at what it could look like.

TARGET FIELD BACK TO FULL CAPACITY?

Shortly before the Major League Baseball season started, Minnesota Twins officials announced Target Field could host up to 10,000 fans. That could change as early as the next home stand, which starts May 14 against the Oakland Athletics. Under Walz’s plan, it’s up to the Twins to determine how quickly they want to ramp Target Field up to full capacity.

Target Field has a maximum capacity of 39,504. Social distancing would be phased out, but fans would still be required to wear face coverings if more than 500 fans are present.

The same goes for Allianz Field, the home of Minnesota United. The Loons played the 2020 season without fans and currently allow for up to 4,100 fans. Allianz Field has a capacity of 19,400. Once restrictions are lifted, it’s at the discretion of Minnesota United to determine how many fans to allow and how fast to get back to a full house.

The Minnesota Vikings would love nothing more than to have 60,000-plus screaming fans for Week 1 in September. That's now likely a lot more feasible with Walz's news on Thursday. The team will release fan information when a plan is in place.

The University of Minnesota football team had up to 10,000 fans at TCF Bank Stadium on May 1 for the annual Maroon vs. Gold Spring Game. The Gophers open the 2021 against Big Ten power Ohio State on Thursday, Sept. 2. There's a good chance TCF Bank Stadium will allow for a sellout crowd without masked fans or social distancing requirements. TCF Bank Stadium has a capacity of 50,805.

The Minnesota Wild doesn’t have the same luxury as other Minnesota sports, with Xcel Energy Center being an indoor venue. The Wild can currently host up to 3,000 fans, but under the new guidelines, they’ll be able to host 25 percent capacity, or about 5,500 fans. Fans would still be required to wear masks until that mandate is lifted, but there will at least be more fans in the building for the upcoming Stanley Cup Playoffs.

3M CHAMPIONSHIP TO WELCOME BACK FANS?

The 2021 3M Open is set for late July at TPC Twin Cities in Blaine. Last year’s tournament was held without fans, and was one of the first sporting events in Minnesota to resume amid the COVID-19 pandemic. It’s a safe bet golf fans can head to the tournament this year, though nothing is official.