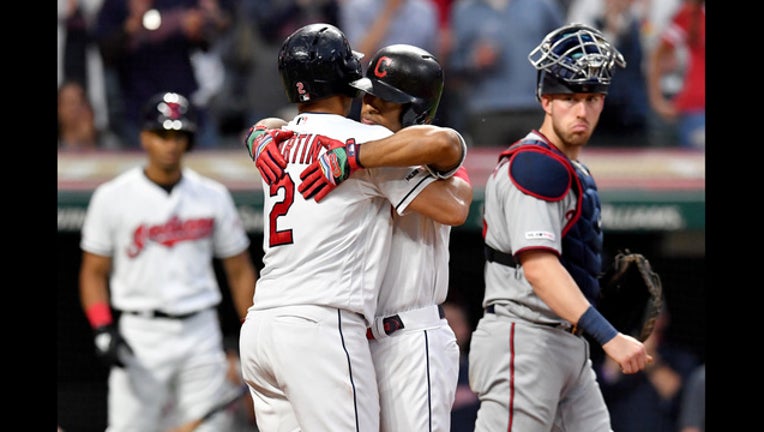 Leonys Martin #2 celebrates with Francisco Lindor #12 of the Cleveland Indians after both scored on a two run home run by Lindor during the fifth inning against the Minnesota Twins at Progressive Field. (Photo by Jason Miller/Getty Images)

MINNEAPOLIS (FOX 9) - One of the two big free agent names in pitching came off the board on Wednesday, and he’s not coming to the Minnesota Twins.

Craig Kimbrel has reportedly agreed to a three-year, $45 million contract with the Chicago Cubs. That’s assuming he passes a physical with the team. The Twins were one of several teams looking to land Kimbrel to boost their bullpen.

To add insult to injury, the Twins lost to the Cleveland Indians 9-7 Wednesday night after the bullpen faltered late in the game. The Twins had a 5-1 lead early after a three-run homer from Byron Buxton and Nelson Cruz’s solo shot.

The game had a lengthy rain delay, and the Indians came out swinging when play resumed. Blake Parker gave up a game-tying, two-run homer to Jordan Luplow in the seventh. The next batter, Roberto Perez, lined a solo homer to right to give the Indians an 8-7 lead.

Francisco Lindor blasted a hanging breaking ball off Tyler Duffey in the eighth, giving the Indians a 9-7 lead.

The performances by Parker and Duffey came with unfortunate timing, hours after Kimbrel’s reported deal with the Cubs. But there is no correlation despite what fatalist fans woke up feeling. It will take Kimbrel about a month, including minor league appearances, to be ready to pitch at the major league level.

There shouldn’t be any fear for Twins fans. Minnesota is 40-20 on the season and still maintains a 9.5 game lead over the Indians in the American League Central Division. The Twins remain the heavy favorite to win the division after their hot start, but now the pressure will be on the front office to add talent to the team before the July 31 non-waiver trade deadline.

They need bullpen depth, and could use a mid-rotation starter.

After Thursday’s series finale at Cleveland, the Twins head to Detroit for a three-game weekend series. The Twins are then back home for a nine-game home stand, which includes Prince Night at Target Field on June 14, and Joe Mauer Day on Saturday, June 15.