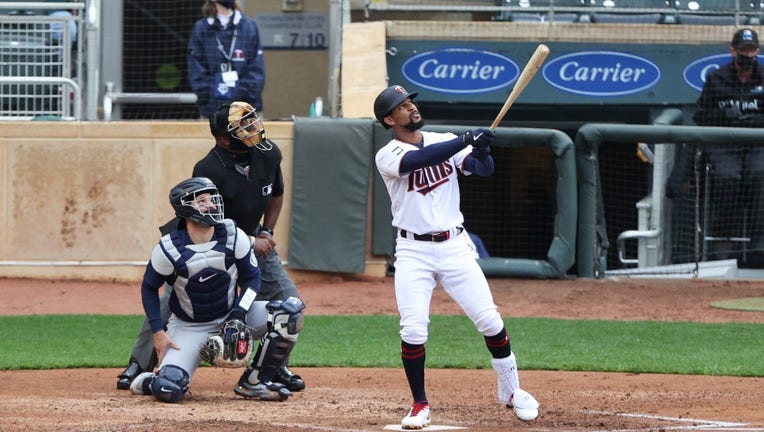 Byron Buxton #25 of the Minnesota Twins hits a home run in the fifth inning during the game between the Seattle Mariners and the Minnesota Twins at Target Field on Thursday, April 8, 2021 in Minneapolis, Minnesota.  ((Photo by Jordan Johnson/MLB Photos via Getty Images))

MINNEAPOLIS - It’s the last week in July, which means the non-waiver trade deadline for Major League Baseball is approaching fast.

Reports emerged over the weekend, first from Ken Rosenthal, that the Minnesota Twins have failed to reach a contract extension with center fielder Byron Buxton. The Twins reportedly made an offer of seven years and around $80 million to Buxton. Negotiations eventually broke down without a new deal in place to keep Buxton in Minnesota long-term.

So what does that mean for the Twins and Buxton moving forward? We should know more by the end of the week. The MLB trade deadline is Friday, but it remains to be seen if Buxton will be moved by then. He was the American League Player of the Month in April, but as has been the case for most of his career, he hasn’t been healthy since.

Buxton missed time with a hip strain, then just a few games after coming off the injured list from that, he suffered a fracture on his left hand after being hit by a pitch. He’s been out ever since, playing in just 27 games this season. In those 27 games, he’s hitting .369 with 10 homers, 11 doubles, 19 RBI and five stolen bases. More importantly, he’s a game-changing defensive presence in center field.

He’s shown his value when he’s healthy, but his inability to stay healthy might make it difficult for the Twins to sign him long-term.

Buxton spoke Monday before the Twins were set to being a three-game series against the Detroit Tigers at Target Field. He said he wants to stay in Minnesota, wasn’t bothered that a contract agreement couldn’t be reached and said, "It’s not the end."

"My representatives know that I want to be here. They take that into account. The Twins drafted me, this is where I want to spend my career."

With 62 regular season games remaining, the Twins are 42-58 and 17.5 games out of the American League Central Division lead after losing three of four to the Los Angeles Angels of Anaheim. They’re 13.5 games out of a Wild Card playoff spot.

What the Twins decide to do by the end of the week will provide a signal for where the future of the franchise might be headed.