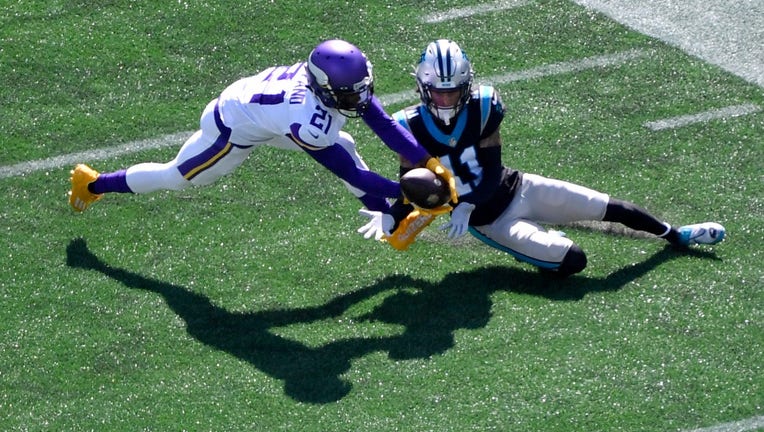 Bashaud Breeland #21 of the Minnesota Vikings intercepts the pass intended for Robby Anderson #11 of the Carolina Panthers during the first quarter at Bank of America Stadium on October 17, 2021 in Charlotte, North Carolina.  ((Photo by Mike Comer/Getty Images))

MINNEAPOLIS - For the second straight week, the Minnesota Vikings had to rally to avoid what would’ve been another bad loss.

The Vikings beat the Carolina Panthers, 34-28 in overtime, to get back to .500 at 3-3. It was a badly-needed win as they head into their bye week, and come out with a four-game stretch against the Cowboys, Ravens, Chargers and Packers. There were highs, there were lows. The bottom line is they got the game-winning touchdown in overtime.

Here are takeaways from the win.

KJ OSBORN HAS A BIG DAY WITH A BIG PLAY

KJ Osborn won the No. 3 receiver job in training camp, and he had his biggest day yet with the Vikings. He finished with six catches for 78 yards, and his 27-yard touchdown from Kirk Cousins in overtime won the game. Maybe just as important, he made a catch earlier in the drive for a third down conversion.

"He’s a gamer. When his number is called, he continues to show up and make big plays in big moments," Adam Thielen said.

Christian Darrisaw made his offensive line debut against the Detroit Lions with 28 offensive snaps. He got his first NFL start on Sunday, and played all 89 snaps in the win over the Panthers. The Vikings’ offensive line didn’t allow a sack, and Kirk Cousins was pressured just four times on 48 passing attempts.

It was a long time coming for Darrisaw, who dealt with a core/groin injury in the offseason that required at least two surgeries, and having to play catch-up in practice after missing much of training camp.

"Just pure excitement and joy really. For me it’s overcoming a lot of things, and just finally being here in this moment and just to get a win in my first start. It was a great day," Darrisaw said. "I don’t feel anything at all from the injury. It’s completely 100 percent healed. The worst days are behind me, I feel great."

The Vikings’ second half offensive struggles this season before Sunday’s game were well-chronicled. One offensive touchdown since Week 1. Sunday, it took a blocked punt returned for a touchdown for the offense to wake up. Trailing 17-12 after Kenny Robinson’s scoop and score, C.J. Ham ignited the offense with a 29-yard run.

Dalvin Cook scored from 16 yards out, Adam Thielen scored a 5-yard touchdown and Greg Joseph added a field goal for 16 straight points. Osborn’s game-winning score gave the Vikings their third score of the second half. The blocked punt woke them up.

"We had a bunch of guys right after that happened that kind of stood up and said ‘You know what, we’re a little dull right now. We need to get going,’" Thielen said.

One of the main reasons Sunday’s game got to overtime was issues on special teams. Jordan Berry had a third quarter punt blocked, which the Panthers recovered for a touchdown. A week after walking off the Lions, Greg Joseph missed a pair of fourth quarter field goals, including a 47-yarder wide right with six seconds left that forced overtime. Both snaps and holds were good, Joseph just pushed them both right.

The Vikings also went 0-for-2 on two-point conversions, one a failed Cook run and the other on an incomplete pass to Jefferson. It’s never easy for the Vikings.

The Vikings’ defense sacked Sam Darnold four times, forced three turnovers and limited the Panthers to just 2-of-12 on third down. But the talk after the win was the Panthers going 96 yards, which included two fourth down conversions, to get a game-tying touchdown and two-point conversion. They got a win, but it shouldn’t have come down to a 96-yard drive.

"We have to put our foot on their throat when we’ve got the opportunities. We didn’t do that yesterday, but we’ve won three out of the last four, so just keep plugging away and trying to get better," Zimmer said.

Next up after a week off is a Sunday Night Football game against the Dallas Cowboys, who have won five straight since a season-opening loss to the Tampa Bay Buccaneers.