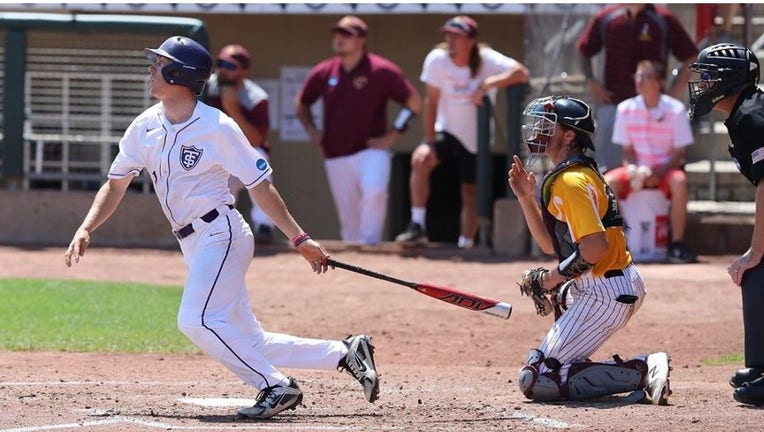 The University of St. Thomas baseball team fell short of a Division III national championship after a 4-2 loss to Salisbury at the College World Series on Tuesday. ((credit: Steve Frommell/d3photography.com))

MINNEAPOLIS - The University of St. Thomas baseball team wasn’t able to end its run in Division III with a national championship.

After losing 6-1 to Salisbury in Game 1 of the championship series in Cedar Rapids, Iowa, on Monday, the Tommies couldn’t complete a ninth inning rally in a 4-2 loss in Game 2 on Tuesday. Salisbury won its first national championship, and St. Thomas ends its season with a 37-10 record as the Tommies head to play in Division I next season.

The finish didn’t come without some drama. Trailing 4-1 in the ninth, St. Thomas had the bases loaded with two out and senior Josh Thorp as the potential winning run. Thorp reached on an error at shortstop, and with the game-tying run at second, Charlie Bartholomew flew out just short of the warning track in left to end the game, sending Salisbury into celebration mode.

The Tommies had a quiet two days offensively, totaling three runs over two losses. St. Thomas had 10 hits on Tuesday, but couldn’t get the clutch hit when it was needed. Over two losses, the Tommies stranded 15 runners and hit into four double plays. All 15 of their hits over the two days were singles.

Sam Kulesa had three hits for the Tommies on Tuesday, and Matthew Enck added two.

St. Thomas took the early 1-0 lead on Avery Lehman’s single with the bases loaded in the third. Salisbury answered in the fourth with three runs on three hits and two hit batters to take a 3-1 lead. Thorp had a chance in the fifth with the tying run on second, but took a called third strike to end the threat.

Salisbury added a run in the seventh, and had a 4-1 lead in the eighth as the Tommies had another threat. Jake Porter entered to pinch hit as the tying run, after leaving Game 1 with a leg injury, but popped out to second on the first pitch to end the threat.

St. Thomas had one final chance in the ninth, but couldn’t complete the comeback after rallying for three other wins at the College World Series to get to the championship series. The win for Salisbury completed a 13-0 mark in the postseason. They won 14 straight and 20 of 21 to end the season.

St. Thomas won Division III titles in 2001 and 2009, and got their third second place finish on Tuesday. The Tommies got seven come-from-behind wins, including two walk-offs, in 14 playoff games to get to the best-of-three championship series. They finished the 2021 playoffs with an 11-4 mark.

St. Thomas will leave the MIAC and Division III to play in the Summit League, starting in 2022.