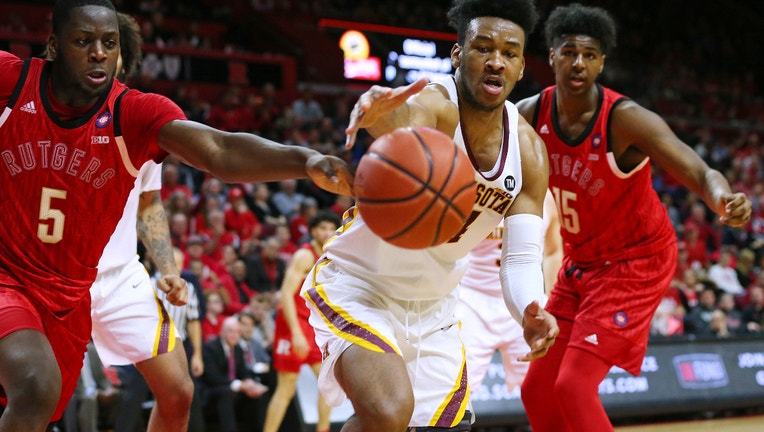 Eric Curry #24 of the Minnesota Golden Gophers in action against Eugene Omoruyi #5 and Myles Johnson #15 of the Rutgers Scarlet Knights during a game at Rutgers Athletic Center on February 24, 2019 in Piscataway, New Jersey. ((Photo by Rich Schultz/Getty Images))

MINNEAPOLIS - The University of Minnesota men’s basketball team closes out its regular season Saturday against Rutgers, and it will be the final game for redshirt senior Eric Curry at Williams Arena.

Curry confirmed Thursday morning to reporters via Zoom that this is his final year of playing basketball, and he won’t return to the Gophers next year. He’s one of three seniors, along with Brandon Johnson and Hunt Conroy, who have the option to come back for another season. The NCAA ruled before the season athletes can play this year without using a year of eligibility due to the COVID-19 pandemic.

But Curry hasn’t been the same since his freshman season. He’s battled through three major injuries, and has managed to play all 26 games this season, and start five. In just less than 15 minutes per game, he’s averaging a modest 3.8 points and 2.7 rebounds per game.

"A lot has played a part in it. I thought about it before the season began, and I’m just trying to give my last run for the guys. I’ve been through a lot, everybody knows that. I came to peace with not being able to play basketball," Curry said.

He already has a degree in Communications, and is completing a Master’s degree in Developmental Leadership. He said he plans to get into coaching, starting as a graduate assistant.

He’s kept a positive attitude after injuries derailed what could’ve been a promising basketball career.

"Basketball has done a lot for my life, it got me an undergraduate degree and it’s about to get me master’s degree. It brought me to Minnesota from a kid who has been down south all my life. It gave me a new experience of the country. It made me so many connections, and I’m thankful for it," Curry said.

The Gophers host Rutgers for Senior Day, and it will be anything but normal. There won’t be fans at Williams Arena, and families of the three seniors can’t come on the court when they’re honored. Pitino said they plan to do pictures, video messages and will honor Curry, Johnson and Conroy.

Johnson will have his parents and his girlfriend in town. Due to COVID-19, he didn’t get a graduation from Western Michigan. He got a virtual diploma before coming to Minnesota, and is still leaving the option open to return next season.

"It’s definitely going to be different. Just going into it with the decision I have to make at the end of the season, it is kind of different getting a Senior Night when I know I have the ability to come back. I’m just going with the flow right now," Johnson said.

"We’ll honor the seniors, but they know they can come back so it’s not a normal Senior Day by any means," Pitino said. "We’ll do our best to make it special for those guys, but also understand that they have the choice to come back."

Just two years ago, a sold out Williams Arena saw the Gophers beat a highly-ranked Purdue team to solidify an NCAA Tournament berth, and students stormed the court. This year? They’re hoping to end a six-game skid, forget about a 2-9 stretch and generate some positivity before the Big Ten Tournament.

Liam Robbins is a game-time decision, while Gabe Kalscheur is still out. Johnson and Gach will each try to play through injuries.

It might also be Pitino’s last game at Williams Arena. There’s been plenty of talk about his uncertain future at Minnesota with this season’s disappointment, which includes going winless (0-10) on the road for the second time in his eight seasons with the Gophers.

They’re unlikely to make the NCAA Tournament after being ranked as high as No. 16 in the country, despite having five wins over ranked opponents.

"We’re clearly a good team when healthy, a team that tied a school record for top 25 wins when healthy. Then all the sudden things out of your control happen, and here’s where you’re sitting," Pitino said. "The one thing I know is people outside the locker room are not going to care. If you play the games, they expect you to win."