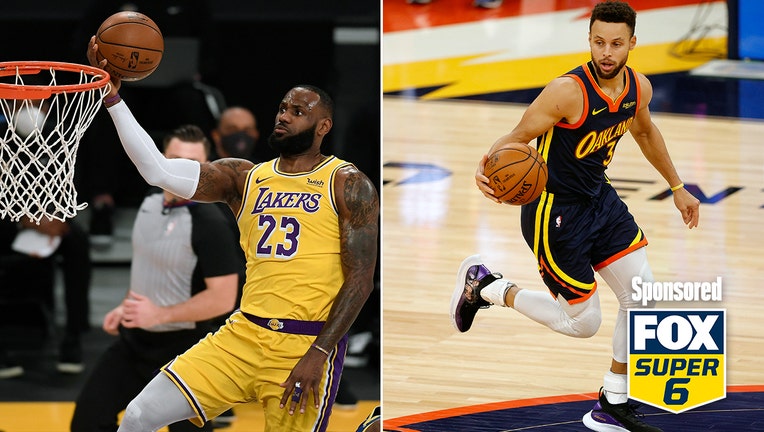 Later in the week, the All-Stars will gather in Atlanta for the NBA’s annual midseason gathering.

But this Wednesday night, the stars will be out all over America, as the NBA has a strong slate of games between elite teams to head into the break.

The marquee game takes place in Philadelphia, where a matchup of the best records in the West and East takes place when Donovan Mitchell and the Utah Jazz face off against Joel Embiid and the Philadelphia 76ers.

And there’s never been a better time to get in the game than with FOX Super 6 on the NBA’s Wednesday night slate. You could win $25,000 by picking the winners of all six games with their correct margins. The best part of all, it’s free. All you have to do is download the FOX Super 6 app on your phone or tablet and make your picks.

(All NBA games are subject to change due to health and safety protocol postponements.)

Utah entered Tuesday with a three-game lead on the Lakers for the best record in the Western Conference and Wednesday will represent the final game of a four-game East Coast road swing for the Jazz (1-2 so far). The two sides met on Feb. 15 in Utah when Jordan Clarkson’s season-high 40 points muted a 42-point effort from Ben Simmons in a 134-123 Jazz win. Embiid did not play that game with a back injury and he has been dealing with an ankle injury recently. Tobias Harris could be back for Philadelphia after suffering a knee contusion which has forced him to sit out the last two games.

The return of James Harden to H-Town is the marquee attraction in this national broadcast. Harden has been a force for the Nets, averaging 25.3 points and 11.3 assists for Brooklyn. Harden has been forced to shoulder more of the load for the Nets with Kevin Durant still out because of a hamstring ailment. The Rockets are looking to avoid a 13th straight loss and – coupled with two weather postponements during the Texas snowstorm in February ⁠— haven’t won a game since Feb. 4. The last five losses of Houston's 12-game losing streak have been by double digits.

Charlotte is in the thick of the Eastern Conference’s playoff race – entering play on Tuesday in the eighth spot, which includes six teams separated by 3.5 games. Charlotte’s leading scorer, Gordon Hayward, missed Monday night’s 123-111 loss to the Portland Trail Blazers with a hand injury and his status for Wednesday is in doubt. LaMelo Ball took up the scoring load, scoring 30 against the Blazers. Meanwhile, the Timberwolves have lost eight in a row and 12 out of 13 – a stretch that saw Minnesota fire head coach Ryan Saunders and hire Toronto assistant Chris Finch.

Two of the most dynamic young players in the game square off in the Bayou as Zach LaVine and the Bulls face off against Zion Williamson and the Pelicans. LaVine is averaging 28.5 points a game – currently ranked in the top 10 in scoring. Chicago has been decent on the road with an 8-7 mark. Meanwhile, Williamson is averaging 25.5 points a game and scored 26 as the Pelicans beat the Jazz 129-124 on Monday night. Chicago won the first game between the two 129-116 on Feb. 10

Portland tries to regain momentum after snapping a four-game losing streak on Monday night with a 123-111 win over Charlotte. Carmelo Anthony had 29 points in the win for the Blazers while Damian Lillard had 23. Meanwhile, the Warriors saw a three-game winning streak snapped on Sunday night with a 117-91 loss to the Los Angeles Lakers at Staples Center. Still, Stephen Curry is a prime MVP candidate, carrying the Klay Thompson-less Warriors into a playoff spot right now in the deep Western Conference, thanks to his 29.5 points per game average, good for fourth in the NBA.

The second game of a back-to-back for Los Angeles, which hosts the tough Phoenix Suns on Tuesday night. Los Angeles will continue to be without Anthony Davis, who has an Achilles and calf issue that will keep him out of this weekend’s All-Star game. The Lakers rebounded with back-to-back wins against the Trail Blazers and Warriors following four straight losses. The Kings have lost 10 out of 11 to fall out of the West playoff picture. Buddy Hield had 30 points in Sunday’s 124-123 loss to Charlotte.

Enter the NBA Challenge contest on the FOX Super 6 app for free, and you can win this week's $25,000 jackpot! Download now at foxsuper6.com!