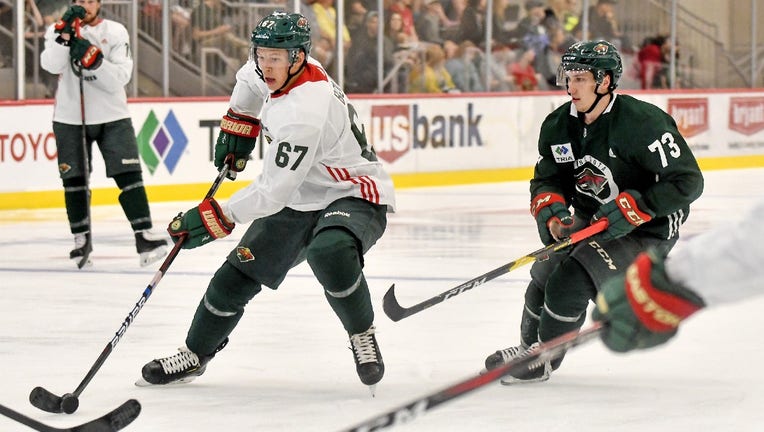 MINNEAPOLIS - The Minnesota Wild will most likely have two of its most highly-touted prospects on the ice when the team is on the road to face the Boston Bruins Thursday night.

The Wild on Tuesday recalled forwards Matt Boldy and Marco Rossi from the Iowa Wild to the team’s taxi squad. Team officials said Tuesday both 20-year-olds, and first round draft picks, are set to make their NHL debut.

The Wild has lost five straight games after dropping the NHL Winter Classic 6-4 to the St. Louis Blues at Target Field on Saturday. The Wild has also dropped to the No. 5 spot in the Western Conference at 40 points, five behind the Vegas Golden Knights and three behind the Blues.

Boldy, the team’s first round pick in 2019 at No. 12 overall, played two seasons at Boston College and was on the Wild’s playoff roster against the Vegas Golden Knights last season, but never saw the ice. He has 10 points, including four goals, in 10 games with Iowa this season. He suffered an ankle injury in early October, and returned to the ice in Iowa a little more than a month later.

Boldy has 28 career points in 24 games with the Iowa Wild.

Rossi, the No. 9 overall pick in 2020, missed all of last season after testing positive for COVID-19, and dealing with the heart condition myocarditis as a result. Rossi has 23 points, including seven goals, in 21 games with the Iowa Wild this season.

The Wild is without defenseman Jared Spurgeon, center Joel Eriksson Ek and goaltender Cam Talbot due to injuries. Jordan Greenway is on the NHL’s COVID-19 Protocol list, and Jonas Brodin is expected to be cleared from COVID-19 protocols and be available for Thursday’s game against the Bruins.