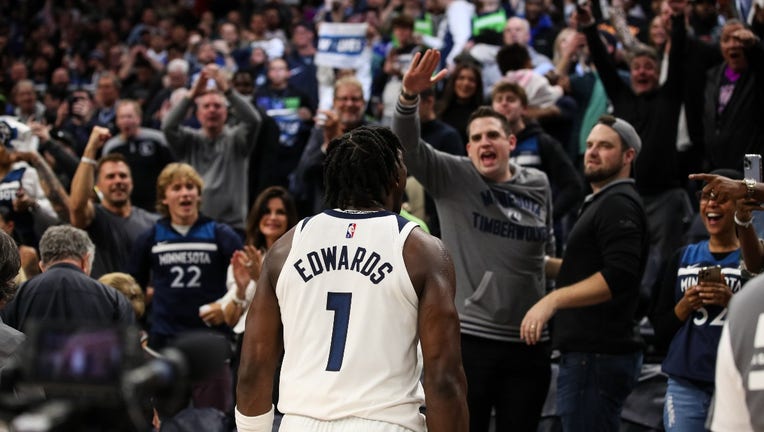 Anthony Edwards #1 of the Minnesota Timberwolves celebrates a 109-104 victory against the Los Angeles Clippers to advance to the NBA Playoffs during a Play-In Tournament game at Target Center on April 12, 2022 in Minneapolis, Minnesota. ((Photo by David Berding/Getty Images))

MINNEAPOLIS - For just the second time since a 2004 run to the Western Conference Finals, the Minnesota Timberwolves are headed to the NBA Playoffs.

In front of a capacity crowd at Target Center Tuesday night, Anthony Edwards and D’Angelo Russell took over in the second half as Karl-Anthony Towns sat on the bench after fouling out with 7 minutes, 34 seconds to play. Edwards finished with 30 points, and Russell added 29 as the Timberwolves beat the L.A. Clippers 109-104 to earn the No. 7 seed in the Western Conference.

They’ll face the Memphis Grizzlies in a best-of-seven series, starting Saturday. The Timberwolves, with Towns fouled out, went on a 16-2 run to get the come-from-behind victory.

"Couldn’t have been more proud of the guys. Emotional win for us, we laid it all out there. We fought through a lot of adversity, but we kept fighting. Every time the game looked like it was going to get away from us, we just kept hanging in there," Timberwolves coach Chris Finch said after the game.

It was personal for Patrick Beverley, who spent the past four seasons with the Clippers before coming to Minnesota this season. He had an extra celebration with Edwards after the win, and enjoyed a Bud Light in the post game media session while Edwards had Gatorade.

Beverley scored just seven points Tuesday, but was a defensive menace and gave the Timberwolves energy when it mattered the most.

"Man I wanted this one so bad. Another goal scratched off. I told you we was going to the playoffs, mostly all y’all looked at me like I was crazy when I first said that. I f****ing told y’all," Beverley said.

The Timberwolves needed somebody to step up with Towns having arguably the worst game of his season. He had four fouls in the first half, started 0-for-7 from the field and made his first basket with less than eight minutes to play in the third quarter.

He finished with just 11 points and five rebounds in 24 minutes. Edwards had 15 points in the first half, and hit big shot after big shot as the Timberwolves made their run. Edwards 10-of-21 from the field, including 5-of-11 from the perimeter. With a playoff spot on the line and the game nationally televised, Edwards became the star.

Edwards left the Target Center floor and as he headed to the locker room to celebrate, said, "When the lights come on, I show up."

"I took what the game gave me. That’s what they gave me. They was scared to guard me, and I took advantage of that," Edwards said.

Beverley told him as much before the game.

"Ant loves the moment, he was awesome. We told him to keep attacking, and he did," Finch said.

A strange first half got more bizarre when a woman glued her hand to the court in protest over a mass killing of chickens at an Iowa farm, owned by Timberwolves’ owner Glen Taylor, because of bird flu. She was immediately escorted off the court by security, and the game was delayed to clean up the floor.

Edwards was the start Tuesday, but he couldn’t do it by himself. With Towns in foul trouble and the Clippers determined to not let him beat them, Russell had to step up. After recording five assists and scoring just one point in the first quarter, he got more assertive in the second half.

Russell shot 10-of-18 from the field, and 3-of-5 from the perimeter. He hit a 3-pointer in transition in the fourth quarter that gave the Timberwolves a 97-95 lead. Edwards then drove the lane for a thunderous dunk that brought the Target Center faithful to their feet, and they never looked back.

"He was awesome. He loves the big moment," Finch said of Russell.

Tuesday was the type of game the Timberwolves have lost so many times before. They weren’t getting calls, they were getting bullied by the Clippers for three quarters and their star was in foul trouble. With the energy from a sellout crowd and adjustments by Finch, the Timberwolves made their run when it mattered the most. They out-scored the Clippers 31-20 in the fourth quarter to get the win.

The Timberwolves also forced the Clippers into 17 turnovers, and held them to 43 percent shooting despite 34 points from Paul George.

"Finchy coached his ass off. Like Pat said, Coach of the Year," Edwards said.

When the game ended, the sellout crowd stayed to celebrate as Edwards and Beverley jumped on the scorer’s table, a lot like Kevin Garnett did in 2004. Now for the second time in 18 years, the Timberwolves are headed to the Western Conference Playoffs.

Beverley had a message for his former team as the win came to a close.

"Take they ass home. Long flight to L.A., take y’all ass home. I gave my blood, sweat, tears to that organization. Just to be written off like that, play them in a play-in game, beat they ass, no other feeling man," Beverley said.

Finch wasn’t terribly interested in reminiscing after the game.

"It’s been well-documented, but I don’t really care about that. I only care about this team and what we’ve been able to do since the middle of February last year," Finch said. "We’ve got great energy around here."