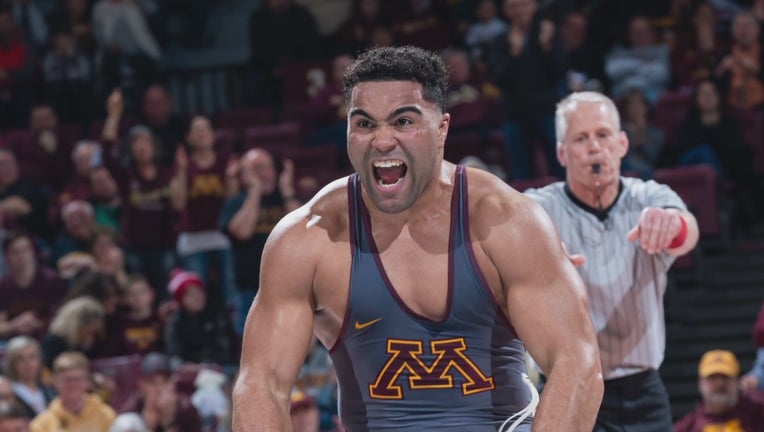 MINNEAPOLIS (FOX 9) - Since his time at Apple Valley High School, Gable Steveson has been a man among boys in the world of wrestling.

But as a Gopher the last two years, he’s been a machine on the mat. Steveson has not lost a college match in more than 700 days.

As a Gopher the last two years, Gable Steveson has been a machine on the mat.

The junior heavyweight star is undefeated heading into the Big Ten Championships this weekend, seeking a second straight heavyweight conference title in 2021.

"I’m locked and I’m ready to take care of my business," Steveson told FOX 9. "Whoever stands in front of me, I just have to take them out one man at a time."

This run is similar to Steveson’s last year. In 2020, he owned a perfect record while and pursing a national title in his home state.

The NCAA Champions were set to be at U.S. Bank Stadium last year, but were cancelled by the COVID-19 pandemic. Missing out on that opportunity a year ago continues to fuel this mission in 2021.

"I wish my time would’ve come last year, but it didn’t," Steveson said. "This year I came in with that mentality."

His mentality is also more mature too, growing on and off the mat since his first college season.

"Freshman year, I was just a little kid that wanted to create a highlight for everyone, and just be cocky," Steveson said. "Now it’s all about just business and winning."

Steveson has the wins this season. He’s 9-0, including two pins in 34 seconds or less, but admits it’s been hard to win over some in the wrestling world.

"The showmanship that I bring always comes out," Steveson said.

Steveson's style is somewhat unique to the wrestling world. When he wins, the heavyweight wrestler is a heavy celebrator, bringing a flair to what is viewed as a stoic sport.

"I know a lot of people hate it," Steveson said of his style on the mat.

Steveson is doing it all his way on the way to a potentially perfect season.

"It’s right in my sights, I just got to grab it," Steveson said.

Steveson is the No. 1 seed in this weekend’s Big Ten Wrestling Championships in State College, PA. The meet begins on Friday, March 6.

The NCAA Championships are slated to be held in St. Louis, Missouri starting on March 18.