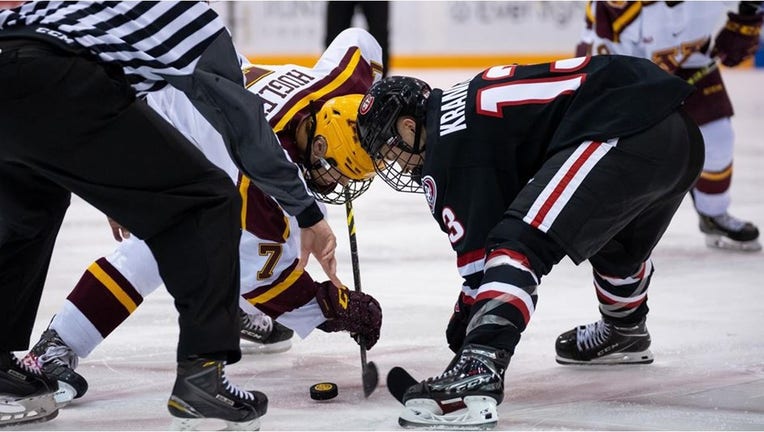 MINNEAPOLIS - The University of Minnesota men’s hockey team earned a weekend split with rival St. Cloud State after a 4-3 win at the Herb Brooks National Hockey Center Saturday night, but not without some controversy.

About 20 seconds into overtime, Blake McLaughlin steals the puck from Nick Perbix on what looks like a pretty clear hooking penalty. It happens right in front of a referee, but there’s no whistle. McLaughlin even stops to look at the official, anticipating a penalty, before skating with the puck and finding Sammy Walker, who scores the game-winning goal.

The reactions from both broadcast crews are telling, in that they each agree McLaughlin should’ve been called for a penalty. Wally Shaver had the call from the Gopher Radio Network, and Fox 9 Sports Director Jim Rich, Mark Parrish and Pat Micheletti had the call on the St. Cloud State side.

Shaver: "How do you not call that?! Sammy Walker scores! Oh the officials just blew the game."

Jim Rich: "How do they not call that?! That is one of the worst non-calls I have ever seen."

Parrish: "We talk about the refs not influencing the game. That’s influencing a game! You gave them a golden opportunity! That is so disappointing to me that this game ended like that. It’s right in front of him! I’m sorry, I know referring is not an easy job, they do a great job. That is atrocious."

Micheletti: "This one’s going to be talked about for a while."

It was bad enough that the NCHC issued a statement about the officials Sunday night, saying McLaughlin should’ve been penalized.

An arena full of Huskies’ fans booed the officials off the ice, threw items on the ice and created a chaotic environment after a thrilling weekend series between a pair of top-five teams.

The Gophers have another in-state rival this weekend with a home-and-home series against Minnesota State-Mankato.