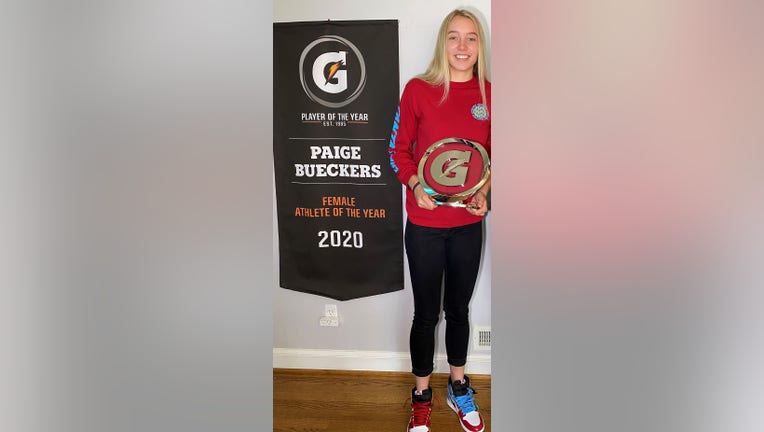 Each year, the honor is given to the top boy and girl high school athletes in the country. The winners are chosen from a group of 12 national award winners in 12 different sports. Tight end Arik Gilbert of Marietta, Georgia won 2020 Gatorade Male High School Athlete of the Year.

In March, Hopkins star Paige Bueckers won the Gatorade National Player of the Year Award, which put her in the running to win&nbsp;2020 Gatorade Female High School Athlete of the Year.

Bueckers, who is committed to the University of Connecticut, is a three-time Gatorade Minnesota Girls Basketball Player of the Year. Her senior year, she led the team to a 30-0 record, but was unable to play the state championship game because it was canceled due to COVID-19 concerns. Bueckers averaged 21 points, 9.2 assists, 5.2 steals and 5.1 rebounds per game. ESPN ranked her as the nation's top recruit for the Class of 2020. Minnesota Timberwolves players even came to watch her last home game.

Gatorade normally reveals the winners at an in-person ceremony, but due to the pandemic, the winners were instead surprised with congratulations videos from professional athletes. Bueckers received messages from professional basketball players Sue Bird, Nneka Ogwumike, Brittney Griner and Minnesota Timberwolf Karl-Anthony Towns.