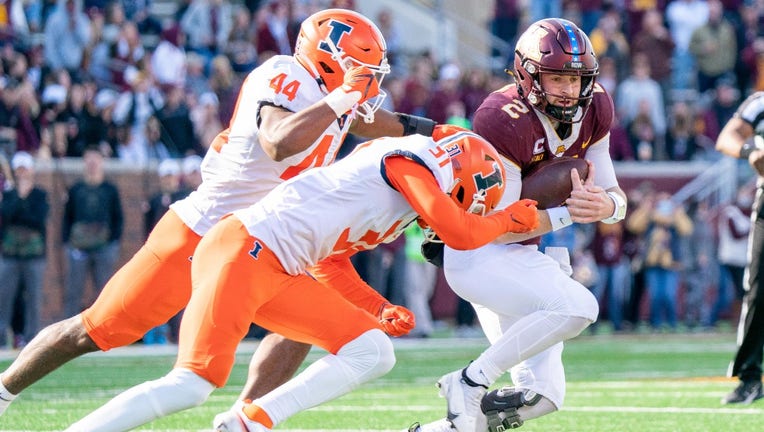 Minnesota Golden Gophers quarterback Tanner Morgan (2) scrambles, brought down by Illinois Fighting Illini defensive back Devon Witherspoon (31) and linebacker Tarique Barnes (44) in the first half on November 06, 2021, at Huntington Bank Stadium in ((Photo by Matt Blewett/Icon Sportswire via Getty Images))

MINNEAPOLIS - The University of Minnesota football team started the "Illinois Championship Season" on a four-game win streak in the Big Ten, atop the West Division, ranked for the first time all season in the College Football Playoff and having finalized a new seven-year contract with PJ Fleck to keep him in Minnesota for the foreseeable future.

Saturday, the No. 20-ranked Gophers had their worst offensive performance since Bowling Green in a 14-6 loss to Illinois at Huntington Bank Stadium. Minnesota entered the game 14.5-point favorites, making it the program’s second home loss this season as at least a two-touchdown favorite. The Gophers (6-3, 4-2) still control their destiny in the Big Ten West division, but there’s a lot to fix with three regular season games remaining.

Minnesota came in having scored at least 30 points in six of its eight games this season. They managed just six against the Illini, and the only score was on 1-yard run from Tanner Morgan on 4th and goal with 4:49 to play.

The Gophers’ eight drives before that ended in a Morgan interception, four punts, a missed field goal and two turnovers on downs. Minnesota had run for more than 300 yards in wins over Maryland and at Northwestern. Saturday, against one of the bottom rushing defenses in the Big Ten? Just 89 yards, and 2.5 yards per carry.

Ky Thomas had 16 carries for just 60 yards. Mar’Keise Irving had just five carries for 26 yards. That’s after both Thomas and Irving had consecutive weeks of each going for more than 100 yards. Minnesota’s four penalties on the day were all on the offensive line. The Gophers got behind Illinois early, and couldn't recover.

"Incredibly frustrating. That is not our football team, that’s not the style we play. That’s not the consistency we play with and when it happens, it’s like a big elephant in the room," Gophers coach PJ Fleck said after the loss. "We weren’t able to finish. The whole story of the game was finish, and we didn’t finish any drives."

Morgan finished 15-of-28 passing for 180 yards, one rushing touchdown and two interceptions. Illinois turned the first turnover of the game into a first quarter touchdown on an Isaiah Williams jet sweep from two yards out. His second, on a throw into heavy coverage intended for Brevyn Spann-Ford in the closing seconds, sealed the win for Illinois.

The Gophers finished the day just 4-of-13 on third down conversions, and 0-for-3 on fourth downs. Morgan was also sacked six times.

"It just comes down to execution. For us, we just have to execute way better. I have to be way better, it all starts with me. We have to learn a lot from today," Morgan said.

Illinois got the win with Brandon Peters completing just seven passes for 80 yards. His lone touchdown on the day went for 15 yards to Tip Reiman to open the second quarter, giving Illinois a 14-0 lead. Chase Brown led the Illini run game with 32 carries for 147 yards.

About the only positive for the Gophers Saturday was avoiding being shutout for the first time since a 31-0 loss to Wisconsin in 2017. The Gophers managed to bounce back from a bad loss to Bowling Green with four straight Big Ten wins. They’ll need to channel that energy for the final three games of the season, starting next Saturday in Iowa City.

To add injury to insult, the Gophers lost receiver Chris Autman-Bell to injury late in regulation.

"When you face adversity, there’s two roads you can go down. You can go down the blame game, you can pull apart or you can come together even stronger as a team. At the end of the day, we’re going to stick together," linebacker Mariano Sori-Marin said.

Bret Bielema is now 8-0 for his career against Minnesota. As bad as the loss looks for the Gophers, their reality is they still control their own destiny to win the Big Ten West. Their final three games are at Iowa next week, at Indiana and the regular season finale against Wisconsin.

Win all three, and you’re headed to Indianapolis to play for the Big Ten title.

"The message to them is everything is in front of us. It’s going to be a 21-day sprint, one game at a time. But it’s the middle of November and we’re in the hunt for the Big Ten West championship. That is what the goal is going to be every year, is to be in the hunt," Fleck said. "With three weeks left, we’re in the hunt and we’ve got to find a way to play better than we did today. I promise you we will."