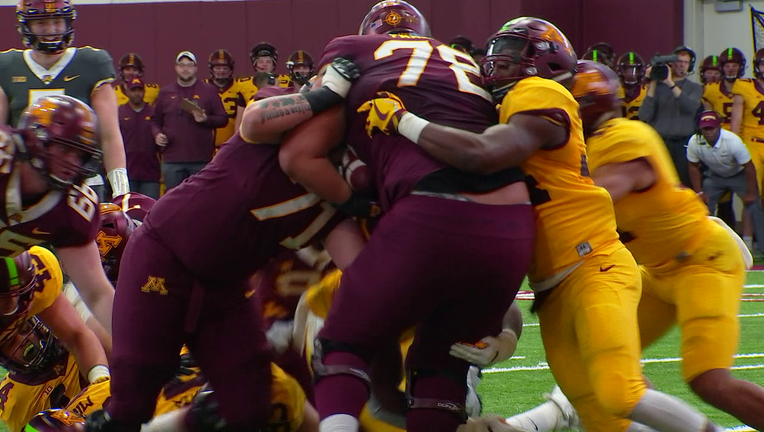 MINNEAPOLIS - The University of Minnesota football team already had two workouts in the books, but the Gophers held their first full official workout of the 2021 spring season on Monday.

The Gophers are coming off a 3-4 season in 2020 after having two games canceled due to a COVID-19 outbreak within the team. They had two losses, Maryland and Wisconsin, in overtime by a combined four points. They also got wins over Purdue and Nebraska by one possession.

Minnesota has most of its roster back from 2020, and a lot of the same players back from the 2019 team that finished 11-2 and beat Auburn in the Outback Bowl. Here’s a few things to watch as spring football starts.

When P.J. Fleck held his first spring practice four years ago, the Gophers had just four healthy offensive lineman. This year, they have more than double that, and most have playing experience from 2020. It’s a group that includes John Michael Schmitz, Conner Olson, Axel Ruschmeyer, Nathan Boe, Sam Schlueter and Blaise Andries. Daniel Fa’alele is back after opting out of the 2020 season, and Curtis Dunlap Jr. could be back in the fall after suffering an Achilles injury last year. Success on offense starts at the line of scrimmage, and the Gophers have depth and experience up front.

The Gophers haven’t had an offensive lineman drafted in 18 years. That’s about to change.

WHAT HAPPENS AT WIDE RECEIVER?

Rashod Bateman is gone and preparing to be a first round pick in the NFL Draft? So what do the Gophers have for 2021? Chris Autman-Bell is the top returning receiver, with 22 catches for 430 yards and one touchdown last season. Daniel Jackson showed potential as a freshman with 12 catches for 167 yards. The only other receivers back with experience are Clay Geary and Michael Brown-Stephens, who combined for nine catches. After that, it’s a lot of unknowns.

HOW ARE THE GOPHERS AT LINEBACKER

Minnesota will return its leading tackler from last season, Mariano Sori-Marin, who recovered from a tough start and made strides by the end of the season. He finished with 54 tackles, and 1.5 tackles for a loss. The Gophers will get James Gordon back after he showed flashes with 16 tackles. Josh Aune and Cody Lindenberg also saw plenty of time in the middle of the defense. The Gophers will be hoping for big things from Braelin Oliver, who missed 2020 with a knee injury.

GOPHERS HAVE DEPTH ON DEFENSIVE LINE

Minnesota might the deepest it’s ever been on the defensive line under Fleck as they enter spring practice. Returning players the Gophers will lean on include Esezi Otomewo, Micah Dew-Treadway, Keonte Schad, De’Angelo Carter and Boye Mafe. Add to the line defensive tackle Nyles Pinckney, who was a captain for Clemson, an annual contender for national titles.

'NO JOB WILL BE WON IN THE SPRING'

P.J. Fleck was adamant in his first spring news conference that there will be competition at every position, and no job will be won in spring football. Fleck said he expects it to be his most competitive spring football yet. That apparently includes Mo Ibrahim, the reigning Big Ten Running Back of the Year, and Tanner Morgan, who is entering his third season at quarterback. Without being able to watch practice, we won’t know until closer to the season-opener in September against Ohio State to know who has progressed enough to earn playing time.

EXTRA: WHAT ABOUT A GOPHERS SPRING GAME?

\The Gophers were about a week into spring football last year when the NCAA shut down all activities due to the COVID-19 pandemic. So will there be a spring football game in 2021? Officials with the Gophers haven’t said anything publicly, but the Minnesota Twins will have 10,000 fans for their home opener on April 8. Given that TCF Bank Stadium is an outdoor venue and fans are hungry for football, it’s hard to imagine there won’t be some sort of spring scrimmage with protocols in place to keep fans safe.