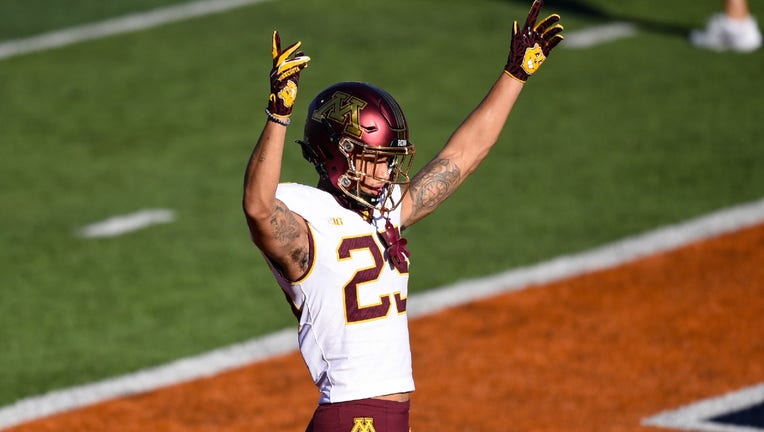 Minnesota DB Benjamin St-Juste (25) during warmups for a college football game between the Minnesota Golden Gophers and Illinois Fighting Illini on November 7, 2020 at Memorial Stadium in Champaign, Ill ((Photo by James Black/Icon Sportswire via Getty Images))

MINNEAPOLIS - Benjamin St-Juste is less than a month away from a dream he’s had since he was 9 years old becoming a reality: Getting to the National Football League.

The Montreal native and Michigan transfer played two seasons for P.J. Fleck in the secondary at the University of Minnesota. On Thursday, he got the chance to showcase his talents in front of more than 50 NFL personnel at the Gophers’ Pro Day.

Gophers like Rashod Bateman turned heads with workouts on their pro days in Minneapolis.

Put all that in a tall frame, and he’s looking a potential future in the NFL at either cornerback or safety.

"I’m very happy about the whole day. I had fun, that was the most important thing about what I wanted to accomplish today. I had fun being with the guys and all that stuff," St.-Juste said Thursday. "Now it’s time to play ball, Combine is over so it’s football now."

Thursday was the result of nearly four months of training, and competing against some of the top prospects in the upcoming NFL Draft back in January at the Senior Bowl.

St.-Juste played in five games in 2020 for the Gophers, totaling 14 tackles and breaking up three passes. He played in all 13 games and started nine in Minnesota’s historic 2019 season, making 45 tackles and tying for the team lead with 10 pass break-ups.

He says he’s leaned on former teammate Antoine Winfield Jr., who just won a Super Bowl in his rookie season, on how to handle the pre-draft process.

"Fun was the main thing. He just told me to have fun with it. You play football to have fun, so don’t be stressed out there. If you don’t have fun playing football, what are you doing? You’re here because you’re good at it, that’s what I keep reminding myself," St.-Juste said.

He’s likely to be the next in a line of Canadian-born football players to make it to the NFL. He says he models his game after current defensive backs Jalen Ramsey, Richard Sherman and Marlon Humphrey.

Projections vary on where St.-Juste might go, but he could get drafted as high as the third or fourth round. He’s played football since he was 9 years old, and he also played hockey from 5 to 14.

He considers it an honor to potentially represent Canada in the NFL.

"You need to shed light on your city, you need to give back to your community, you need to reach out to the younger generation to give them hope and resources I didn’t have growing up," St.-Juste said. "I wanted to be that kid that was different that could make it to the NFL."

That likely becomes a reality about a month from now. In his words, "It’s time to play ball."