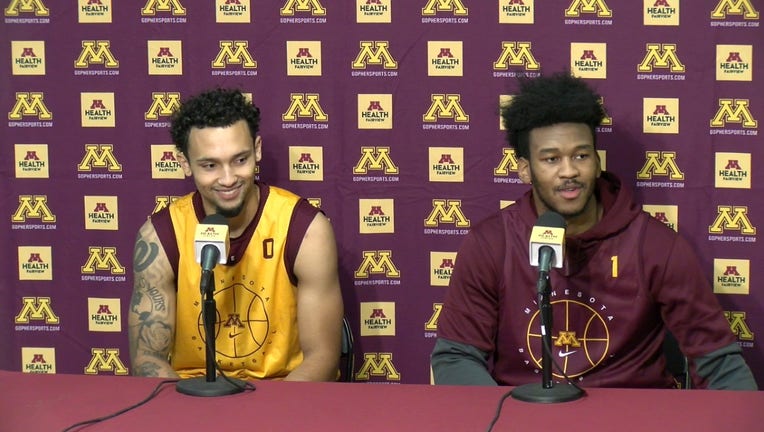 Eric Curry and Payton Willis are reunited as Gophers teammates and are the only 2 healthy players on the 2021-22 roster with Big Ten experience.

MINNEAPOLIS - Eric Curry said before the Big Ten Tournament last year the 2020-21 season would be his last with the University of Minnesota basketball team.

Who could blame him? The senior forward, who has had a career filled with significant injuries, was tired and ready to move on. He had even accepted a role as a graduate assistant coach with the program. But then things changed, between getting a free year of eligibility with the COVID-19 pandemic and taking a few months off.

Curry’s body healed, he had new energy and didn’t want to end his college career without playing in front of fans again. July 6, he posted to social media, "Let’s have one last dance, Gopher fans."

Being healthy had as much to do with his return for a sixth year, as the program’s new head coach. He wanted to play for Ben Johnson, who helped bring him to Minnesota initially.

"The history I had here. I love the fans, people here have been amazing with the support. I didn’t want to leave that last year taste in my mouth. I wanted to go out the right way," Curry said Wednesday.

This is the first time in Curry’s time in college that he’ll enter a season completely healthy. He played 29 games last season, starting eight, averaging 3.7 points and 3.1 rebounds per game. He’s one of just two players on the 2021-22 roster with Big Ten playing experience.

The other? His good friend Payton Willis. They were teammates two years ago, before Willis transferred to play last year at College of Charleston. Willis started all but two games two seasons ago for the Gophers, averaging 8.9 points. He was also second in assists and third in steals as Minnesota’s floor general at point guard.

Last year at Charleston, Willis started every game, led the team in minutes and was the team’s third-leading scorer at 13.4 points per game.

Willis thought he might pursue a professional career overseas after last season, but it didn’t take long for him to hear from Johnson after putting his name in the NCAA transfer portal. The recruiting pitch? He’ll run the offense and reunite with Curry.

"Playing for Coach Johnson and having the ball in my hands was a big part of the choice of me coming back, and obviously being around Eric," Willis said. "It all happened so fast. His pitch was great and I feel at home with my decision to come back."

The Gophers feature 10 transfers on the 2021-22 roster. Curry and Isaiah Ihnen are the only two back from last season, and Ihnen is out for the year after having knee surgery. Curry and Willis are the only two on the team with the experience of going through a Big Ten season.

The Gophers have eight seniors, but for many of them, this year will be the first time they go through the rigors of a full-time Power Five schedule. That actually started last weekend with a scrimmage at Oklahoma.

Minnesota starts the season with an exhibition against Concordia-St. Paul Monday night at Williams Arena. The season starts for real Nov. 9, against Kansas City. The Gophers, picked by many to finish last in the Big Ten this season, hope to make some of those doubters turn heads.

"Basketball I would say is basketball at the end of the day. If you know how to play it, it’ll look good," Curry said.