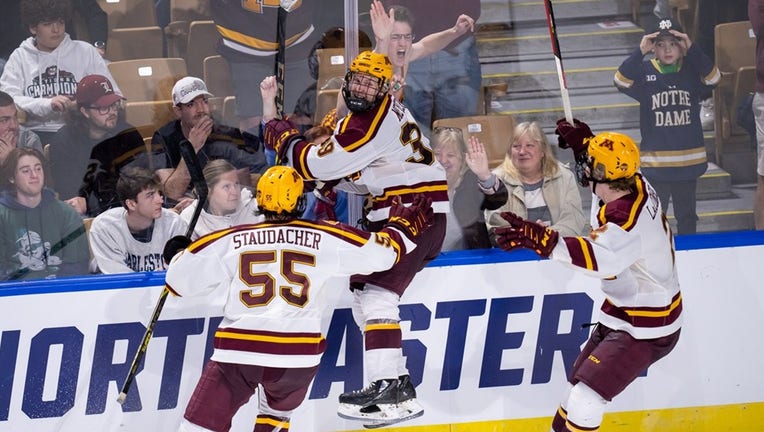 They did just that in a 4-3 in over defending champion UMass, then a 3-0 shutout of top seed Western Michigan at the Worcester Regional. Motzko, the Big Ten Coach of the Year and on Tuesday named a finalist for National Coach of the Year, now has the Gophers in their 22nd Frozen Four.

Minnesota is seeking its sixth national title, and first since 2003, when Motzko was an assistant for Don Lucia. But it wasn’t an easy route to get there. The Gophers trailed the Minutemen 2-0 midway through the first period, then trailed 3-1 before coming back to win in overtime.

After the slow start with UMass scoring with an extra attacker and then on a power play, Minnesota allowed on goal the rest of the weekend.

"You’ve been in this tournament so many times and you just say ‘Oh God.’ It was a crushing feeling," Motzko said Tuesday. "Then you come back from two goals against a heck of a team in UMass. The good thing is we had a lot of time left and we dug in."

The Gophers scored seven goals on the weekend, with four of them coming from freshmen Matthew Knies, Tristan Broz and Aaron Huglen. Huglen also fed Ben Meyers with a perfect pass in overtime for the game-winner against UMass.

The Gophers (26-12) enter the Frozen Four in Boston having won 11 of their past 12 games. Their only loss during that stretch was to Michigan, another team in the Frozen Four, in the Big Ten title game.

Minnesota got hot over the last two months after getting series splits over five straight weekends to end 2021.

"Early in the year when you coach at Minnesota, God forbid you split a weekend because you’re not supposed to do that here. We split five straight. We would get criticized, why weren’t we playing well?" Motzko said. "The truth is I thought we were playing well and we had some big wins in there and we were growing. It just took us a while to come together."

Minnesota will face Motzko’s close friend, Mike Hastings, and Minnesota State University-Mankato in the nightcap on April 7. The Gophers and Mavericks, once WCHA rivals, did not meet in the regular season, but both have been top-five programs most of the year. The winner faces the Michigan/Denver winner on April 9 for the national title.