(FOX 9) - A high-impact winter storm is moving through Minnesota Wednesday as temperatures drop rapidly across the region and winds increase.

A blizzard warning was issued for Western Minnesota and the Twin Cities metro area Wednesday afternoon and it will stay in effect through 6 a.m. Thursday. 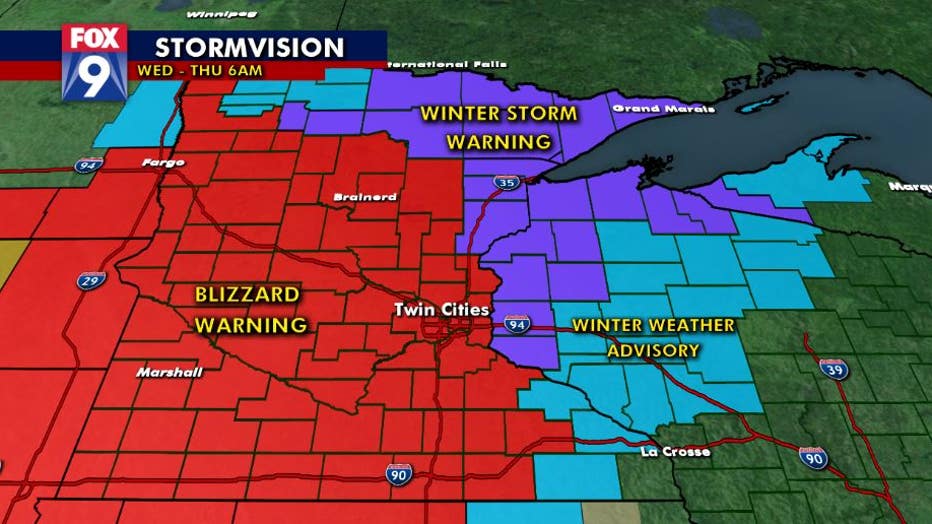 The Twin Cities are under a blizzard warning Wednesday as a high-impact winter storm moves through the area.

Wednesday morning rain left moisture on Minnesota roads that will freeze as snow continues this afternoon and evening.

Snowfall rates of 1" to 2" per hour are possible this afternoon for brief periods. Some areas of the Twin Cities metro can expect around 6-9 inches of snow.

Limited visibility in western Minnesota as winter storm moves in

There was limited visibility and blowing snow on Highway 10 near Moorhead, Minnesota, leading to some crashes and cars off the road. Video courtesy of the Minnesota State Patrol.

The afternoon snow will be coupled with wind gusts near 50 miles per hour, creating near zero visiblity at times into the early evening.

MnDOT issued a no-travel advisory due to the whiteout conditions.

A timelapse video taken from an Eagan home's video doorbell shows the rain turn to snow Wednesday during a high-impact snowstorm.

Temperatures lingered around 30 degrees at noon, but will fall quickly down to 15 degrees by 6 p.m.

The snow is expected to taper off in the mid to late evening as the system tracks off to the east-northeast around mindight.

Blizzard conditions on Highway 10 in Waconia

The Winter Storm Warning will stay in effect through 6 a.m. Thursday in the greater Twin Ctieis metro area.

A deep freeze is possible overnight with sub-zero temperatures and dangerous wind chills in the -20 to -30 degrees range.