The Minnesota Bureau of Criminal Apprehension released on Wednesday its 1,000 plus-page redacted case file from their investigation into the deadly law enforcement shooting of Winston Smith Jr.

MINNEAPOLIS (FOX 9) - The Minnesota Bureau of Criminal Apprehension released on Wednesday its 1,000 plus-page redacted case file from their investigation into the deadly law enforcement shooting of Winston Smith Jr. 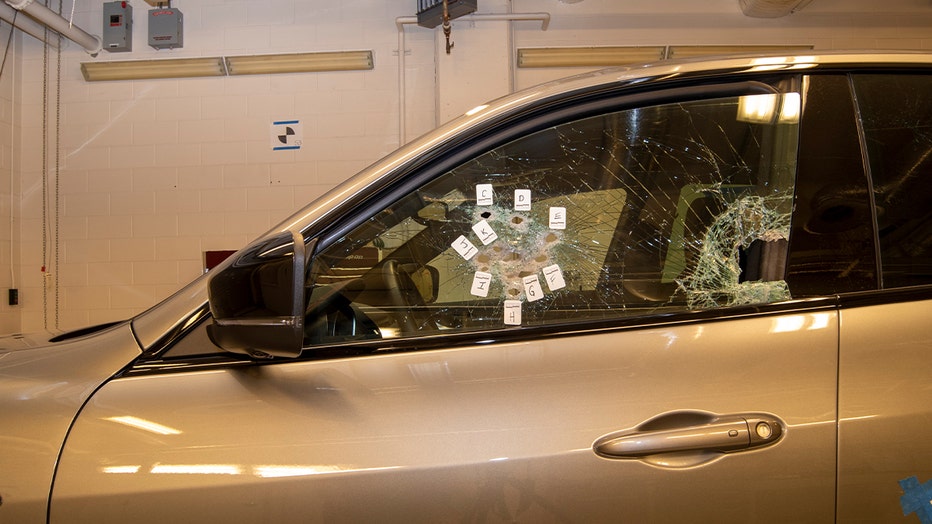 In addition to the redacted case file, the BCA also released numerous audio files and photos of Smith's Maserati with several bullet holes in the driver's side window and the rear window shot out. The photos also showed Smith's alleged handgun.

Last week, Crow Wing County Attorney Donald Ryan announced he had reviewed the BCA’s investigation of the deadly shooting and would not file charges against the deputies involved in the shooting, saying the deadly use of force was justified.

A prosecutor determined there will be no charges for the deputies who shot and killed Winston Smith Jr. in Minneapolis.

Evidence showed Smith fired six times from inside his car. Ryan said body camera footage after the shooting showed the passenger in Smith’s vehicle telling officers how she pleaded with Smith to cooperate.

The BCA said it is still reviewing and preparing that video to be released. There is no video of the shooting itself, but there is body and dash camera video from law enforcement officers who responded to the scene after the incident.

"I was like bleeding and I was terrified because I thought it was a gunshot," said Askar. "And I thought I was going to die. I just kept thinking about my son and that was it. It happened so quickly. I was just on a date."

Shortly after the deadly June 3 encounter on top of an Uptown parking ramp, the lone non-law enforcement witness to what happened spoke to investigators. Norhan Askar said she had been going out with Winston Smith for a few weeks. They had just finished up lunch at Stella’s across the street when police descended on the Maserati that Smith had borrowed from an acquaintance and chaos ensued.

"Police was like put your hands up where we can see it," said Askar. "I know they were talking about Winston because clearly, they could see my hands. I was cooperating. I put my hands all the way up. He wouldn’t put his hands up. He was like, ‘I am going to die, I am going to die.’ And then he went on Facebook Live. All of a sudden, I don’t know if police shot the car or if they broke it open."

"But the glass, something shooted in the car, I felt like something coming towards my head so then I went like this and it grazed right here and right here," said Askar. "So it would have hit my head if I didn’t move, but I’m just so happy the police didn’t shoot me because I moved because I wasn’t trying to die."

Askar’s audio-recorded interview is just one of the many pieces of evidence in the redacted BCA investigative case file released publicly Wednesday that includes more than 1,000 pages and scores of photographs.

Some taken at the crime scene, capturing the bullet-riddled Maserati, the gun authorities insist Smith fired from inside the vehicle as well as Askar’s bloodied clothing that she voluntarily provided.

There is no known video of what happened. Askar had said then she did not recall seeing Smith with a weapon.

"I don’t know anything about him," Askar told police. "And that’s the crazy part like I’m just wondering, is he an f---ing killer? Like, there was like 50 officers there, like a whole SWAT team. Like what the hell did he do wrong?"

The identities of the deputies who fired their weapons are protected by law because of their undercover work with the federal task force. However, their names did surface in the initial file release from the Minnesota BCA on Wednesday morning.

The bureau acknowledged the mistake Wednesday evening, writing in an email: "The BCA has taken down the Winston Smith case file temporarily after it was brought to our attention that it contained instances of three names that are not public under Minnesota statute 13.82, subd. 17(a). The names have been removed and a scan of the written case file for any further references to these names is underway. The file will be reposted once this review is complete."

A spokeswoman tells FOX 9 the publishing of the names may threaten the individuals' personal safety.