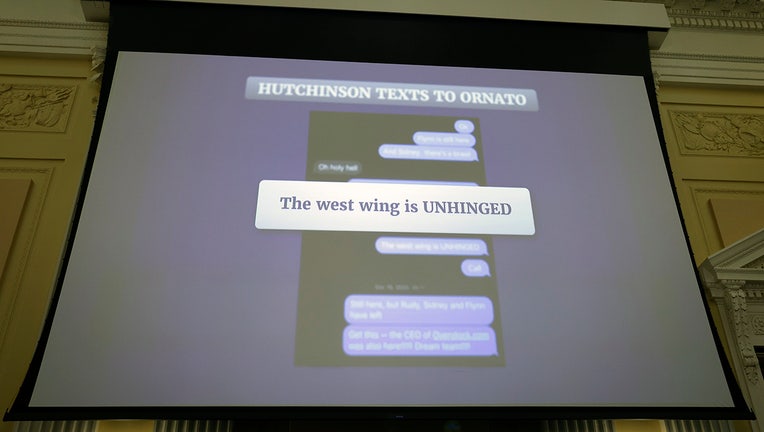 A text from former White House aide Cassidy Hutchinson to Assistant Director of the United States Secret Service Anthony Ornato appears above members of the Select Committee to Investigate the January 6th Attack on the U.S. Capitol during the seventh

WASHINGTON - Secret Service agents deleted text messages sent and received around the Jan. 6, 2021, attack on the U.S. Capitol even after an inspector general requested them as part of an investigation into the insurrection, the government watchdog has found.

The Department of Homeland Security Office of Inspector General, in a letter obtained by The Associated Press, said the messages between Jan. 5 and Jan. 6, 2021, were erased "as part of a device-replacement program." The erasure came after the watchdog office requested records of electronic communications between the agents as part of its probe into events surrounding the Jan. 6 attack.

Additionally, Homeland Security personnel were told they couldn't provide records to the inspector general and any such records would first have to be reviewed by DHS attorneys.

"This review led to a weeks-long delays in OIG obtaining records and created confusion over whether all records had been produced," states the letter, which was dated Wednesday and sent to leaders of the House and Senate Homeland Security committees.

Secret Service spokesman Anthony Guglielmi told the AP, "We take strong issue with these categorically false claims and I will be responding in detail shortly."

The erasure of the messages is sure to raise new questions for the House panel investigating the Jan. 6 attack, which has taken a renewed interest in the Secret Service following the dramatic testimony of former White House aide Cassidy Hutchinson about former President Donald Trump's actions the day of the insurrection.

Hutchinson recalled being told about a confrontation between Trump and his Secret Service detail as he angrily demanded to be driven to the Capitol, where his supporters would later breach the building. She also recalled overhearing Trump telling security officials to remove magnetometers for his rally on the Ellipse even though some of his supporters were armed.

The Jan. 6 House committee investigating Donald Trump's role in the Capitol riot and his efforts to overthrow the election held another hearing about the days leading up to and during the insurrection. In one section of testimony, former campaign manager Brad Parscale exchanged text messages with Katrina Pearson, a Trump advisor who organized the Jan. 6 rally, expressing that Trump was asking for a civil war and that his rhetoric lead to deaths during the riot.

That account, however, was quickly disputed by those agents. Robert Engel, the agent who was driving the presidential SUV, and Trump security official Tony Ornato are willing to tetify under oath that no agent was assaulted and Trump never lunged for the steering wheel, a person familiar with the matter told the AP. The person would not discuss the matter publicly and spoke on condition of anonymity.

The erasure of the text messages was first reported by The Intercept.