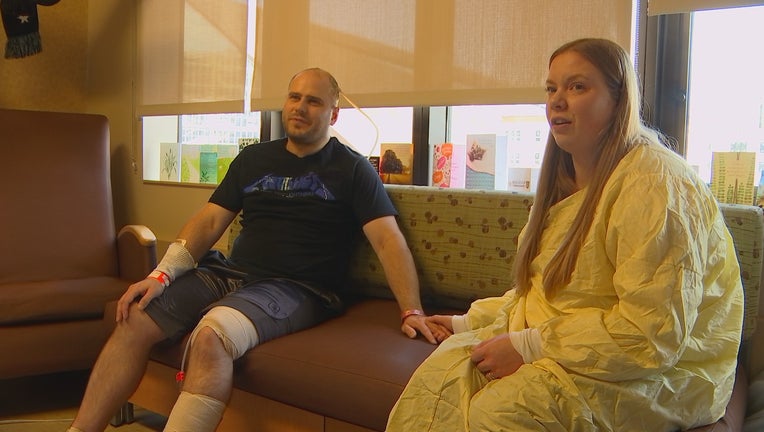 Deputy Joshua Langr sits in the hospital with his wife Kelly, as he makes a recovery after being shocked by a down power line.

(FOX 9) - A Waseca County deputy is recovering from his second surgery after a lethal dose of electricity nearly killed him.

In late October, Deputy Josh Langr was shocked by a downed power line while he was responding to a deadly rollover accident.

Thursday, Langr spirits seemed up and he was smiling and joking as he makes his way on the long road to recovery after the life-threatening incident. His most recent skin graft surgery on Monday went well but forces him to be on bed rest for about a week.

And he's already had quite a bit of time to think about how much worse this could have been.

"I remember being on the phone talking to the trooper," Deputy Langr recalled. "At some point, I would have entered the ditch and I woke up here."

Waking up at Hennepin County Medical Center on October 23, Deputy Josh Langr didn't immediately realize how close he came to death. With pain management, reality has sunk in.

While on the scene of the deadly accident, which brought down an electric pole in Waseca, Deputy Langr came in contact with the power line. An estimated 1,300 volts entered through his head and out through the sides of both his feet.

"I got too close and it arced and threw me about 10 feet," Langr explained. "The amperage was insane. A taser is 3.5 milliamps and I took 200,000 milliamps roughly. It’s really staggering that I’m still walking."

Langr's burn surgeon at HCMC says it's hard to believe he doesn’t have problems from a neurological perspective or internal issues with his organs.

"We see people with contact points of fingers and hands and they are lucky to be alive," said Dr. Jon Gayken. "And to have your head be your contact point, and to survive is considerable... Is miraculous for sure."

So far, he's had two graft surgeries, most recently transferring skin from his upper leg to his feet. But it's the fourth-degree burn on his head, all the way down to his skull, doctors know will require more surgeries and take at least two to three months to heal.

"I think every time I start to get a little overwhelmed, someone says, 'Gosh, what a miracle that Josh is still alive,'” said Langr’s wife Kelly. “And it just snaps me right back. It is a miracle. And that’s what’s important that he’s here with us. And the rest will fall into place."

Langr, his wife, and their two young boys are thankful for what they call an avalanche of support, including some from their beloved Minnesota United.

All of it making that long road to returning to his patrol car seem a little closer. "Everybody makes me feel like I got to get back out there because I want to do them proud," he added.

Supporters have launched a GoFundMe fundraiser and CaringBridge page to track Langr's status and to support his recovery.