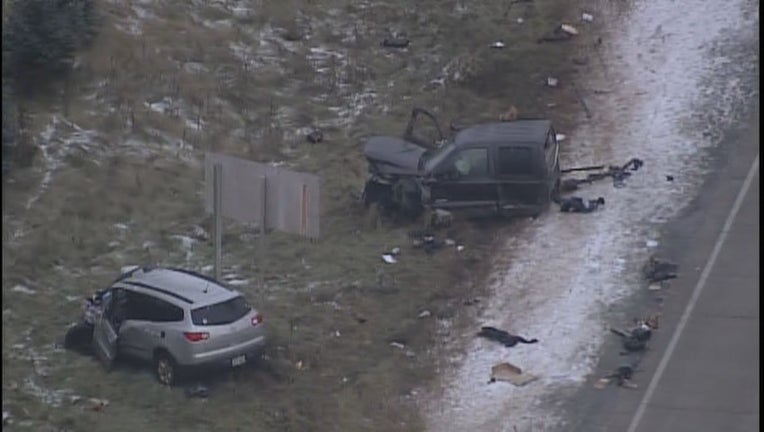 A chase, which started in the Twin Cities metro area, ended in a crash near Hudson, Wisconsin. (FOX 9)

HUDSON, Wis. (FOX 9) - A police chase, involving multiple agencies, started in the Twin Cities metro area and ended in a crash near Hudson, Wisconsin, according to the St. Croix County Sheriff's Office and the U.S. Marshal Service.

A police chase, involving multiple agencies,&nbsp;started in the Twin Cities metro area and ended in a crash near Hudson, Wisconsin, according to the St. Croix County Sheriff's Office and the U.S. Marshal Service.

According to the St. Louis Park Police Department, authorities had been searching for the suspect following an incident that happened earlier this month. On November 3, a woman reported to police that a man had broken into her home in the 2300 block of Parklands Road, sexually assaulted her and then forced her to withdraw cash for him at two different ATMs.

On Wednesday, authorities attempted to arrest Groves near Newport, Minnesota. Once he was confronted, he left in a black Ford F-350 pickup truck and began a pursuit that would span multiple counties.

After the truck crossed the bridge, it went into a ditch and started heading southbound on Highway 35 in Wisconsin. Hitting speeds around 70 mph, the truck went through North Hudson and Hudson. The truck was able to keep going even after partially hitting stop sticks. The truck then got onto I-94 and traveled eastbound in the westbound lanes until it got off on a ramp and started heading southbound in the northbound lanes on Highway 35.

A Washington County Sheriff's deputy used a PIT maneuver on the truck, which caused the truck to hit an unoccupied disabled vehicle and then go into the ditch on Highway 35 just south of Tower Road.

Groves is now in custody with the U.S. Marshals Service for probable cause burglary, criminal sexual conduct and other Ramsey County warrants. He is being treated for minor injuries he suffered during the crash.

Groves’ roommate told FOX 9 that police came to their St. Paul home last month and arrested him for stealing nearly $10,000 in tools and trailers from various people who own construction companies.

Groves later spoke to FOX 9 on the phone. He claimed he wasn't a thief; he just trusted the wrong people who brought construction tools to his different job sites.

“I had no idea any of that stuff was stolen—people come to my jobs all the time with tools for sale and this and that—I don’t know if stuff is stolen or not—you guys are making it out like I’m stealing stuff from job sites that’s not true at all,” said Groves in the phone interview.

Groves has a long criminal history including a stalking case back in 2016 where he broke into his ex-girlfriend's home and violated a no-contact order she filed against him.