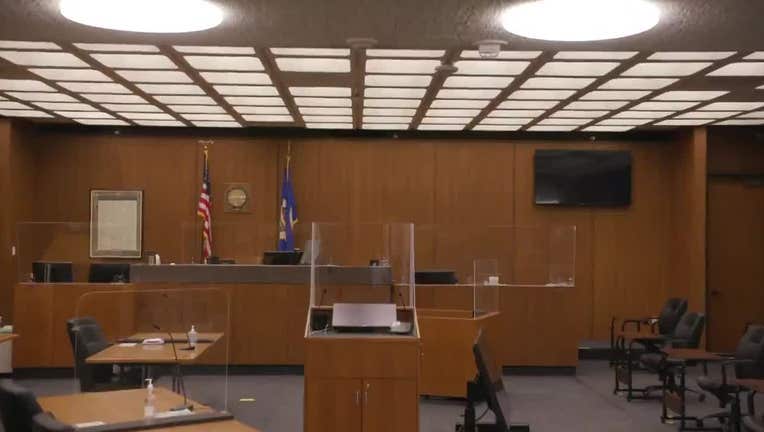 Courtroom 1856 at the Hennepin County Government Center is prepared for the Derek Chauvin trial for the death of George Floyd. (FOX 9)

MINNEAPOLIS (FOX 9) - Gov. Tim Walz turned down a request to vaccinate everyone in the courtroom before the murder trial of former Minneapolis police officer Derek Chauvin.

Walz said parties involved in the trial asked him to move them up in the priority list several weeks ago, which would have been enough time to get both doses before jury selection, which is scheduled to start Monday.

Those who will be in the courtroom for Derek Chauvin trial in the death of George Floyd will not be moved up the COVID-19 vaccine eligibility list, according to Minnesota Gov. Tim Walz.

When asked by FOX 9 on Friday, Walz said he declined after consulting with his health advisers.

"The Minnesota Department of Health folks determined there's other trials happening, there's other folks waiting," Walz said. "It was a health care decision that it (the Chauvin trial) didn't pose a specific extra risk, nor did it mean moving someone ahead of someone else (in the priority line)."

Some of the participants will become eligible for a vaccine before the end of what's expected to be a lengthy trial. Some jurors may be over the age of 65, and judicial system employees are among the frontline essential workers that will likely be eligible in a few weeks at the current vaccination pace.

Chauvin, 44, is charged with second-degree murder and second-degree manslaughter in the death of George Floyd, a Black man who died in May 2020 after Chauvin held him to the ground by putting his knee on Floyd's neck for nearly nine minutes.

Who is allowed in the courtroom

Courtroom 1856 was renovated specifically for the Chauvin trial to maximize capacity and maintain COVID-19 social distancing standards. Those inside will have to follow strict guidelines.

READ NEXT: Derek Chauvin trial: What to know