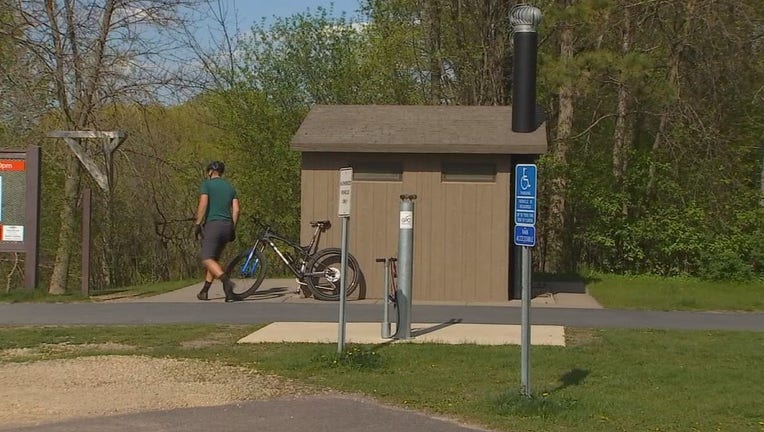 A cyclist parks their bike outside a public bathroom near a bike trail. (FOX 9)

MINNEAPOLIS (FOX 9) - University of Minnesota researchers are launching a crowdsourced project called MN Bike and Go to identify toilets that bicyclists can use throughout the state of Minnesota.

Bathrooms have been harder to find in the last year as the pandemic closed many public buildings.

University of Minnesota researchers are launching a crowdsourced project called MN Bike and Go to identify toilets that bicyclists can use throughout the state of Minnesota.

"If you’ve got an emergency, no. 2 so to speak, then you’ve just got to do it where you got to do it," bicyclist Joel Benton said.

"People might go on the side of the road," said Dr. Donna Bliss, a organizer on the project. "Your bowel sometimes is very persistent, when you’ve got to go, you got to go."

A team of interdisciplinary researchers is behind the project, which went live in late April. Dr. Bliss is a professor in the School of Nursing, while Len Kne leads U-Spatial, which specializes in geographic information systems.

"We just kept building the survey and the map," Dr. Bliss said.

They got the idea from similar programs around the world.

"Australia has one for the entire country, all of their major cities are on the map," Dr. Donna Bliss said. The U.K. has a system as well.

Now their website has launched, showing bikers where they can find a restroom.

"Anyone on a ride can look while they’re riding or even sort of plan ahead," Dr. Bliss explained. "You know you don’t want to have to hold it too long."

The information is entered by bicyclists, for bicyclists.

"Absolutely, I would use it," Hintz added.

The map even allows users to review their pit stop, giving anywhere from a one to five star rating.

"[Based on] their cleanliness, how many stalls there are, if it’s within a building, do they have handwashing," Dr. Bliss explained. "No one has been squeamish about it, everyone thinks this is a really good idea."

Organizers say bicycling groups and bike shops are responding favorably to the idea too. The website has only been up and running for a few weeks so the number of restrooms is just taking off, but growing steadily.