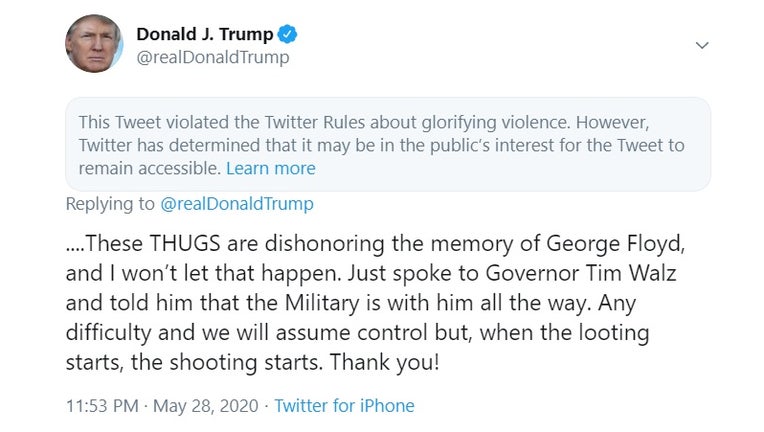 The warning replaces the president's tweet text unless a user clicks on the message.

(FOX 9) - Twitter has put a warning on a tweet fired off by President Trump warning of extreme actions to control the riots and looting in Minneapolis.

"I can’t stand back & watch this happen to a great American City, Minneapolis," tweeted President Trump. "A total lack of leadership. Either the very weak Radical Left Mayor, Jacob Frey, get his act together and bring the City under control, or I will send in the National Guard & get the job done right."

The Minnesota National Guard was activated on Thursday. By the evening, 500 soldiers had been deployed to Minneapolis and St. Paul.

President Trump also spoke out against the violent protesters.

"These THUGS are dishonoring the memory of George Floyd, and I won’t let that happen," he wrote. "Just spoke to Governor Tim Walz and told him that the Military is with him all the way. Any difficulty and we will assume control but, when the looting starts, the shooting starts. Thank you!"

Shortly after, Twitter officials placed what they call a "public interest notice" on the second message. The notice says: "This Tweet violated the Twitter Rules about glorifying violence. However, Twitter has determined that it may be in the public’s interest for the Tweet to remain accessible."

The notice also includes a link to the site's policies. Despite the notice, the tweet is still visible to users who click on it.

"We've taken action in the interest of preventing others from being inspired to commit violent acts, but have kept the Tweet on Twitter because it is important that the public still be able to see the Tweet given its relevance to ongoing matters of public importance," explained site leaders in a tweet.

The warning comes days after Twitter put a similar notice on another tweet, fact-checking a claim the president made about mail-in ballots. It also comes hours after President Trump issued an executive order dropping legal protections for social media companies in response to the steps taken by Twitter.

In a late-night news conference, Mayor Jacob Frey also responded to the tweet.

"Weakness is refusing to take responsibility for your own actions," said Frey. "Weakness is pointing your finger at somebody else during a time of crisis."

Frey responded by saying Trump didn't have an understanding of the city or the situation.

"Donald Trump knows nothing about the strength of Minneapolis," Frey added. "We are strong as hell. Is this a difficult time period? Yes. But you better be damn sure we are going to get through this."

Mayor Frey also tweeted that the city is working with the fire department to deliver resources.

Thursday night protesters broke into and set fire to the Minneapolis Third Precinct. Fires and looting also broke out throughout St. Paul.