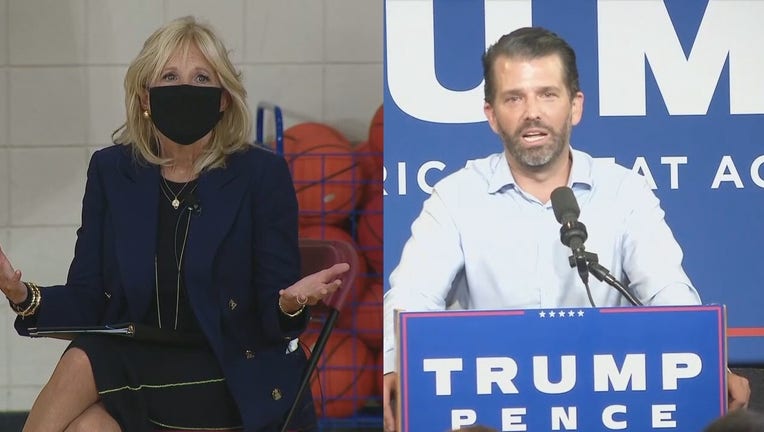 Polls have been inconsistent in Minnesota, showing Biden with a nonexistent to moderate lead. Both campaigns have said repeatedly that they think the state, which Democratic presidential candidates have won every year since 1972, is in play this November.

Jill Biden told reporters that her husband would campaign in the state, though the Biden campaign has yet to release any specific travel plans.

"We absolutely can win Minnesota," Jill Biden told reporters. "I looked at the polls this morning. It’s looking good, but we’re not taking any vote for granted."

Republicans have mocked Joe Biden for not visiting Minnesota since 2017, long before he launched his current presidential campaign. President Trump and Vice President Mike Pence have been frequent visitors as they try to flip the state.

Donald Trump, Jr., speaking in front of a crowd of supporters at the Duluth Entertainment Convention Center, contrasted his father's record with that of Biden.

"Imagine being in a position running around after a 50-year career in DC saying he’s going to fix things now," Trump, Jr., said of Biden's 36 years in the U.S. Senate and eight as vice president.

U.S. Rep. Dean Phillips, a first-term Democrat who represents the west Metro suburbs and supports Biden, said Biden needs to come to Minnesota in-person to share his message -- something Phillips expects will happen.

"Minnesota is a battleground. I think that’s become apparent," Phillips said in an interview. "It is important. I hope he comes to the cities, the suburbs, and outstate Minnesota as well."

Trump, Jr.'s rally looked different than Jill Biden's campaign stop in Prior Lake, where about a dozen people sat socially distanced in the elementary school's gym.

Two teachers and the Minnesota teachers' union president spoke at the event about their concerns with the start of the school year amid the coronavirus pandemic.

"If I would ask you anything, it would be to follow through on the resources we need," said LeAnn Weikle, a first-grade teacher at Jeffers Pond. "Because our students succeed when we have what we need, the tools we need to support them."

Joe Biden and running mate Kamala Harris have a proposal to spend tens of billions of dollars on cleaning supplies, protective gear, and doubling funding for school psychologists and counselors.

"I just want you to know that Joe and I will always have your backs," Jill Biden told teachers.

Meanwhile, Trump, Jr., pointed to union workers in the crowd at his rally and blasted Joe Biden's past support for trade agreements that President Trump has blamed for eliminating U.S. jobs. The Trump campaign is focused on the traditionally Democratic northeast corner of the state.

"You may not always like the way he (Trump) says things, but it's the truth, and sometimes you need to hear it," the president's son said.