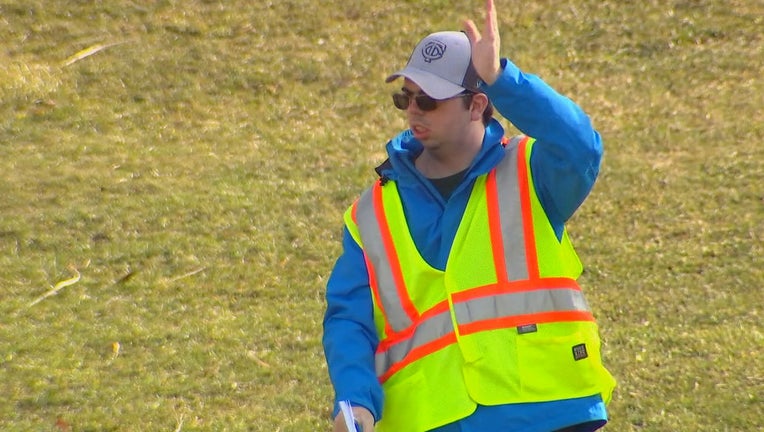 John Carlson, a man with autism who lives in Lonsdale, Minnesota, has become a welcoming figure for people that pass near his home. (FOX 9)

MINNEAPOLIS (FOX 9) - On the outskirts of Lonsdale, there's a friendly fixture, who encourages a symphony of car horns to fill the air.

"He's kind of known to lots of people as the ambassador of Lonsdale," said mother Roz Carson. "Because he welcomes people into town and out of town. Strangers or people he knows."

A young man on the autism spectrum has become an unofficial greeter in one community just south of the Twin Cities metro.

John Carson has autism and every day he walks down the hill behind his house and stands next to the road to wave to all the cars that drive by.

"He loves waving to every single one of them and dips his head kind of a thing," added Roz. "The semis he does this to. The boys in trucks he says light ‘em up. and he hopes they rev up his motor."

John's mother says he became a human welcome wagon after his dad taught him how to get the attention of passing semi-trucks during a family trip to Illinois a few years ago.

Now he spends hours during his lunch break after school and on weekends, giving a wave, nod, or thumbs up to traffic.

John Indulges in his personal pastime all year around and as much as he loves his fellow townspeople, they love him right back. Last year, after the pandemic started, more than 400 cars took part in a drive-by parade for his 20th birthday.

Because sometimes it’s the little things in life that make the biggest difference.

"At his age, he could do be doing a lot of things that are not so good," said Roz. "As long as he can do it and enjoys it. It's good for me."