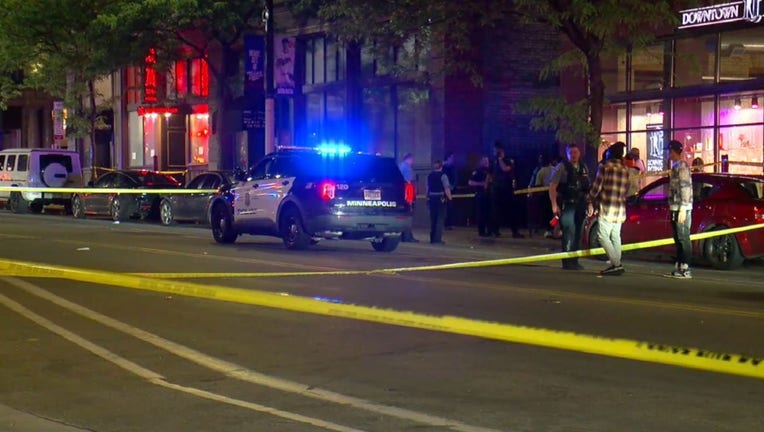 MINNEAPOLIS (FOX 9) - Two people have died and eight others were injured after a shooting in downtown Minneapolis overnight, according to the Minneapolis Police Department.

The incident happened at 1:59 a.m. Saturday in the 300 block of N 1st Ave near the Monarch nightclub. Police officers were nearby when they heard shots ring out.

Two people have died and eight others were injured after a shooting in downtown Minneapolis overnight, according to the Minneapolis Police Department.

"[Officers] observed numerous other people running through the area. It was a very chaotic scene. Officers dealt with a number of people who had been shot and were laying on the ground," said MPD spokesman John Elder.

Elder says investigators learned two men standing in a crowd outside got into an argument, pulled out guns and began shooting at each other.

Of the 10 victims, five are men and five are women. The two people who died are both men. Another man is in critical condition at a hospital. Seven other victims went to hospitals across the metro with non-life threatening injuries.

Later in the day, police said they believed one of the people killed was one of the gunmen and the other may have been an innocent bystander. The other suspected gunman was arrested Saturday afternoon by Bloomington police, officers said. He is now being held on probable cause murder in Hennepin County Jail.

Saturday evening, the University of St. Thomas said one of its students, Charlie Johnson, was killed in the shooting.

Johnson, a mechanical engineering student, died just hours before he was set to walk the stage for graduation Saturday.

This shooting happened just hours after a deadly shooting Friday evening in the Jordan neighborhood.

After another violent night in Minneapolis, community activists are calling for an end to the violence.

"These brazen senseless acts of gun violence must stop. The perpetrators of these crimes should never find refuge or anonymity in our communities. Minneapolis police officers will continue to rush into harms way to save lives however we need help from community leaders and residents to stand up and speak out denouncing loudly that they will not tolerate this violence as well. Our greatest strength is when we all work together to keep our city safe. Our children are watching us and how we respond during these times. Let’s come together to uplift hope and peace."

"Last night again brought tragic news. Again, our collective conscience is shocked. Lives have been lost on our Northside and downtown. And we are left to process the reality that bullets have struck innocent bystanders, people welcoming the warm weather and celebrating being together again.

"These outcomes are not fated. We can stem crime in our city, but it will take all of us coming together with a renewed commitment to preventative work and a shared resolve to stop the gun violence and bring the perpetrators to justice. Both Chief Medaria Arradondo and Director Sasha Cotton – two of this country’s foremost experts in their fields – have my complete support in securing the resources they need for the hard work ahead."

Statement from Steve Cramer, President and CEO of the Minneapolis Downtown Council:

"There is no excuse for the reckless, irresponsible and criminal behavior on display early this morning in the Warehouse District that left two people dead, eight injured and countless more frightened after enjoying a night out. There are too many people in our City today who believe they can act with impunity, consequences be damned. Until that changes, and our entire community rises up – family members, elected officials, business, community and faith leaders, prosecutors, judges, all of us – to say enough, we can expect this insanity to continue. In particular, we look for determined, clear-eyed leadership from City Hall to put Minneapolis back on course as a City that engenders respectful behavior so all can thrive."