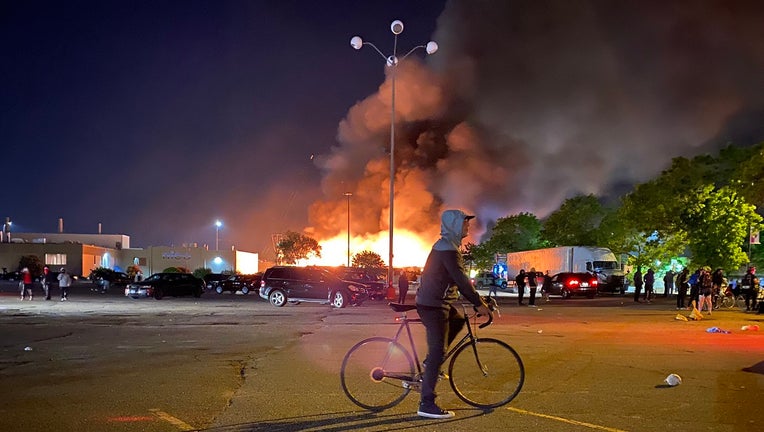 A man watches a fire burn near the Minneapolis Fifth Police Precinct. during the riots that followed George Floyd's death. (FOX 9)

ST. PAUL, Minn. (FOX 9) - Minnesota's response to the 2020 riots that broke out after a Minneapolis police officer killed George Floyd was too slow, a new report found.

The state eventually brought a historic deployment of the Minnesota National Guard and State Patrol that restored order to city streets. Yet there were many failures: mistreatment of peaceful demonstrators, a lack of coordination with Minneapolis Police, and little discipline for what went wrong.

State of Minnesota was slow to respond to 2020 rioting, report finds

Minnesota's response to the 2020 riots that broke out after a Minneapolis police officer killed George Floyd was too slow, a new report found.

"It was all new for the state and city to be operating in this way," Anna Granias, a Wilder research scientist, told lawmakers on the House Public Safety committee during a Thursday afternoon hearing.

The report, conducted by St. Paul-based Wilder Research, cost taxpayers $180,953. It follows a previous independent review conducted by a separate third-party firm for the City of Minneapolis that blamed the city for numerous breakdowns.

State officials eventually set up a multi-agency command center at TCF Stadium, since renamed Huntington Bank Stadium, on the University of Minnesota campus. The site was not ideal because of its proximity to the rioting could have made it a target, the report found. The stadium was the state's third choice after two preferred sites were unavailable because of COVID-19.

Minneapolis Police participation at the multi-agency command was lacking. The agency had representatives there, but Chief Medaria Arradondo was "notably absent," the report found.

On the ground, police officers, State Patrol, and National Guard soldiers failed to distinguish between lawful and unlawful protesters. This led to injuries to both protesters and journalists. The State Patrol recently settled a lawsuit in which it agreed to a series of changes related to crowd control.

Minnesota lawmakers raised questions about why the report was finally released nearly two years after the incidents it describes.

"There’s also been speculation that this report was delayed or heavily edited to avoid embarrassment or not having to act on these recommendations," said state Rep. Cedrick Frazier, DFL-New Hope. He urged state Public Safety Commissioner John Harrington to release all drafts of the report, which Harrington did not commit to doing.

Harrington said Wilder researchers delayed their report, so they could talk with people in the White Earth Native American community and Somali community.

"We thought that was the right thing to do," he said. "If we were going to have a comprehensive report, that made the most sense to me."

Lawmakers also questioned why so few state law enforcement officials had been disciplined for the errors outlined in the report. Harrington said six internal affairs complaints had been filed, leading to one disciplinary action. He did not describe the cases.